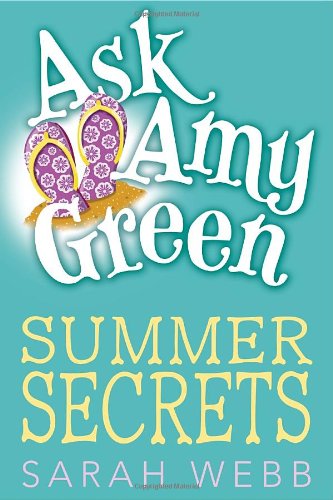 Ask Amy Green: Summer Secrets
Sarah Webb
Amy is trapped in family vacation hell- until she and Clover, her teenage aunt, get a chance to interview a hot U.S. movie star with a secret.(Age 11 and up)Could this summer be any worse? Thirteen-year-old Amy’s dreamy boyfriend, Seth, is off to Rome, while she gets to spend two weeks on a tiny Irish island with a nagging mom and a neurotic aunt locked in a feud, not to mention a crazy stepdad and a surly cousin. Good thing Clover, teen advice columnist supreme, is there to keep Amy from going completely nuts! It doesn’t help Amy’s changeable mood that Seth keeps mentioning some girl in his e-mails, or that Amy feels an electric attraction to the mysterious young gardener next door. So when The Goss magazine unexpectedly sends Clover to glitzy Miami to write a revealing piece on a hot young actor (with Amy as her sidekick, of course) it couldn’t come at a better time. U.S. of A-mazing- here they come!
1 Vote

Amy Green's life had just gotten perfect, and then her family had to go and ruin it. Her parents decided to go on a family trip; with her mom's ex-husband and his wife and kids. Meanwhile, her new boyfriend is going to be spending the summer in Rome, without her. Thankfully her cousin Clover is going too, so Amy won't go nuts while on vacation. Just as Amy's summer started to take a turn for the worse, Clover's magazine company decides to send her to the U.S. to interview America's new teen movie star and uncover his secrets.