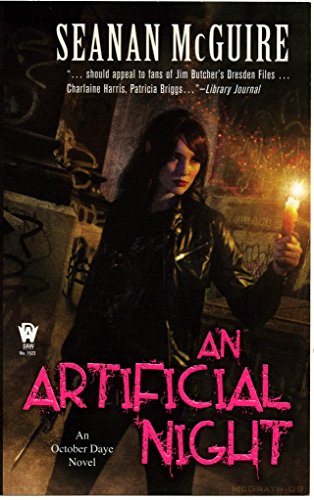 An Artificial Night
Seanan McGuire
New York Times-bestselling October Daye series • Hugo Award-winning author Seanan McGuire • "Top of my urban-paranormal series list!" —Felicia Day Changeling knight in the court of the Duke of Shadowed Hills, October "Toby" Daye has survived numerous challenges that would destroy fae and mortal alike. Now Toby must take on a nightmarish new assignment. Someone is stealing both fae and mortal children—and all signs point to Blind Michael. When the young son of Toby's closest friends is snatched from their Northern California home, Toby has no choice but to track the villains down, even when there are only three magical roads by which to reach Blind Michael's realm—home of the legendary Wild Hunt—and no road may be taken more than once. If she cannot escape with all the children before the candle that guides and protects her burns away, Toby herself will fall prey to Blind Michael's inescapable power. And it doesn't bode well for the success of her mission that her own personal Fetch, May Daye—the harbinger of Toby's own death—has suddenly turned up on her doorstep...
1 Vote

An Artificial Night is a fantasy novel about a changeling named October Daye (or Toby as she prefers to be called) She is a half human and half fairy. She has been through a lot, including having lost her child. She is trying to get her life back after being turned back into a human from being a fish for 10 years, when her best friend's children are kidnapped, as well as all the children from her old flames court. As she investigates, she discovers that many, many children, both human and fae have been kidnapped, leaving hot window panes, and bad smells in the air.