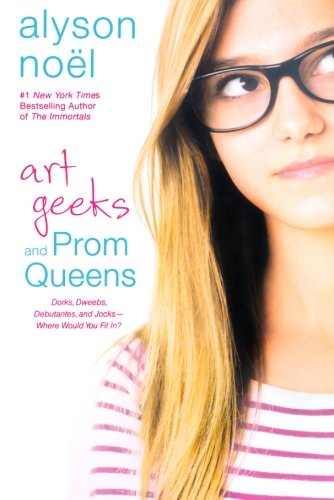 Art Geeks and Prom Queens
Alyson Noël
Being the new girl is tough―just ask sixteen-year-old Rio Jones. A New York transplant, Rio has no clue how she's going to fit in at her fancy new private school in Southern California. Plus, being late, overdressed, and named after a Duran Duran song doesn't make the first day any easier.Then, Rio meets Kristi. Beautiful, rich, and a cheerleader, Kristi is the queen bee of Newport Beach, and she isn't friends with just anyone, so Rio is thrilled when she's invited to be part of the most exclusive, popular clique. At first, Rio is having a great time, but as she becomes more immersed in the jet set crowd, she discovers an unwritten rule that her new friends forgot to mention: don't cross Kristi... in Alyson Noël's Art Geeks and Prom Queens.
1 Vote

Rio Jones is the new girl in California and has just left her whole life behind back in New York. To add onto all that, she has to find a way to fit into her fansy private school. Then she meets Jas and Mason. Two art geeks who welcome her in. But Kristi decides to do the same. Rich, a cheerleader, and everyone's worst nightmare. Rio accepts Kristi's offer and joins Kristi and her pack. But being popular comes with a few rules.