Arrows, Bones and Stones: the shadow of a child soldier - Book 2 in The Stones Trilogy Series 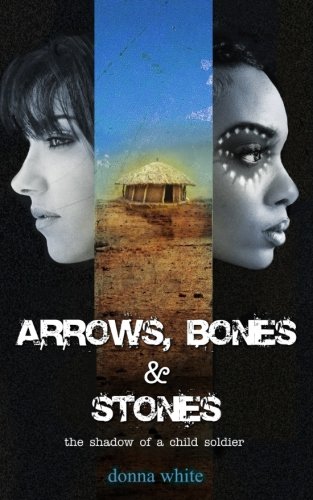 Arrows, Bones and Stones: the shadow of a child soldier - Book 2 in The Stones Trilogy Series
Donna White
Charlie looked at Fire, then to the burning logs, and back to her again. Finally, he spoke. “If you were taken by the LRA, why can you not say it just?” Fire glanced at Charlie and sighed. “Because when you are a girl, there is more to lose.” Charlie has much to fear since escaping the Lord’s Resistance Army. If recaptured by Joseph Kony, he faces torture and death at the hands of his fellow soldiers. If he returns to his own village, many will seek revenge at the end of a hangman’s rope for killing and maiming his own people. But it is the ajiji he fears most—the haunting flashbacks and tormented nightmares of the evil deeds he has committed. When he meets Fire, the village witch doctor, Charlie sets out on a journey where he must learn to face the sun and leave the shadows of his past behind him. But many secrets can’t be revealed. And Fire, a beautiful young girl who has recently escaped from the LRA, holds the darkest secret of them all. “Arrows, Bones and Stones compellingly reveals the struggle faced by those trying to overcome childhood trauma. For youth abducted and forced to fight as child soldiers, escape is not the end of the story, but just the beginning. The shadow of their past haunts them, and the physical scars and psychological wounds cut deep. But even in the darkest hour, there is always the promise of new light. Yes, this is a story of despair, guilt, and shame, but it’s also one of resilience and hope.” - Patrick Reed, Director/Producer, Fight Like Soldiers, Die Like Children “In this second installment in the trilogy, Charlie, Fire and Sam, provide us with the necessary human contexts to the plight of girl child soldiers but also the harsh reality of losing a loved one at a young age. The gripping tale reminds us that even in the midst of inhumanity, we all have the ability to be hopeful, and have the will to survive. An incredibly well written book! I can't wait for the next one.” - Michel Chikwanine, former child soldier and author of Child Soldier: When Boys and Girls are Used in War
1 Vote

Tweet
Arrows, Bones and Stones: the shadow of a child soldier - Book 2 in The Stones Trilogy Series review by Christian Reader

Charlie escaped from the LRA (Lord's Resistance Army) a week ago. His journey brought him to the home of Fire, a young witchcraft-performing mother tending to her child. Fire takes care of Charlie and helps him get his strength back. She protects him against those in her village who would do him harm.