Arash the Archer: A Story from Ancient Persia 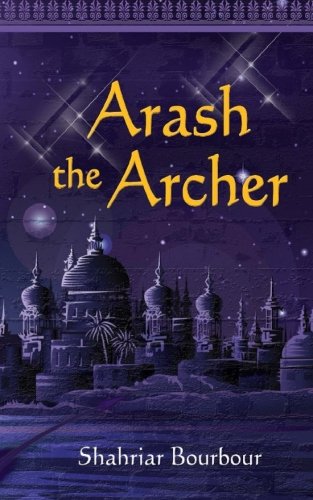 Arash the Archer: A Story from Ancient Persia
Shahriar Bourbour
Arash lives in the city of Ray in ancient Persia. At the age of twelve he is a capable archer. His dream is to shoot an arrow far enough to mark the border between the rival empires of Persia and Tooran. He believes that Simorgh the Queen of Birds has given him a message in the form of a riddle that will help him achieve his dream. But he is unaware that Ahriman the Devil and his Deevs are plotting against him.   This book is inspired by the ancient story of Arash the Swift Arrow who with a single shot sent an arrow all the way to the Oxus River and marked the border between Persia and her rival empire of Tooran.   The story introduces several other characters of Persian mythology including King Hooshang, Simorgh, Zahak, Ahriman and his Deevs, as well as the Zoroastrian philosophy of the constant battle between Good and Evil, to an audience of 8 to 12 year olds.   Children with or without Persian heritage, might be more attracted to the mystery and intrigue in which the heroes are children their own age.   3rd edition includes additions to the plot.
3 Votes

Tweet
Arash the Archer: A Story from Ancient Persia review by moseso

Arash the Archer is a fictitious story set in the city of Ray in ancient Persia. Arash&nbs

What's this?
Arash the Archer: A Story from Ancient Persia review by Jonah Ross

Shahriar Bourbour’s book Arash the Archer is about a young boy with high hopes and dreams. He is the son of an exalted alchemist and former soldier in the army of King Manucher. Arash is finally ready to see the family treasure. Arash will also meet friendly spirits and battle evil demons and make new friends to restore peace and prosperity to his people.

What's this?
Arash the Archer: A Story from Ancient Persia review by McLeanC23

A boy called Arash lives in the city of Ray in Ancient Persia. His wish is to shoot an arrow across the Oxus River to mark the border of Persia. Doing so will free Persia from the rule of Tooran.

His father, Abteen, decides to show Arash the family treasure, which turns out to be an arrow, made almost entirely of gold. Abteen says the arrow was given to his great-grandfather by King Hooshang, the Fire King himself! Legend has it that Simorgh, Queen of Birds, had given Hooshang a magical arrow containing fire powder. Could this be the arrow?