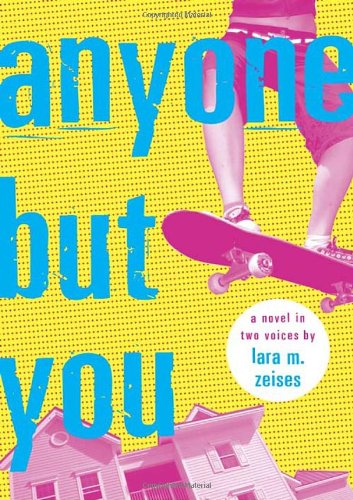 Anyone But You
Lara M. Zeises
Critter and Jesse have been close to Seattle since her dad moved in with their mother. Closer still since he took off six years ago and Layla decided to raise Sea as one of her own. It’s a decision none of them regrets, especially not Critter. He’s more than a brother–he’s Seattle’s best friend.Now it’s vacation, and Seattle and Critter are stoop sitters, at least until summer school starts in July. It beats working like Jesse, or worse, studying like Layla wants them to. It’s too hot for Seattle to be on her skateboard–too hot, even, for Critter to be scamming on girls. But Sea comes up with a plan for them to bluff their way into the ritzy swimming pool the next town over. Big mistake.Soon Critter’s got his heart set on a Penn Acres princess, while Seattle’s trying hard not to fall for a skater boy on the rebound. For the first time in a long while, they can talk to anyone but each other. Then Seattle’s dad shows up unexpectedly, and the way of life Critter and Seattle have always known begins to change even more. . . .
1 Vote

This book is about the lives of a "mixed" family. Sea is a girl that is taken in by her father's ex-wife when he leaves. The story is based on the interchanging of lives between Sea, and her 2 step-brothers; Critter and Jessie. They are all at an age of trying to figure out who they are and where they are going in life. When Sea feels threatened by a new person in Critter's life, she becomes withdrawn and looks for other ways to fill her time. She meets up with a boy named Scott, who shares her interest in skateboarding.