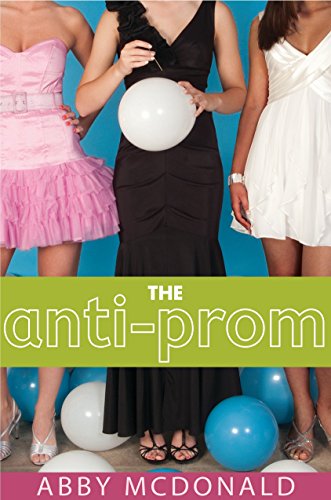 The Anti-Prom
Abby McDonald
Three unlikely allies team up for a night of rebellion, romance, and revenge in a high-stakes dramedy from acclaimed young author Abby McDonald.(Age 14 and up)They’ve spent years at the same high school without speaking a word to one another, but that’s all about to change. Popular Bliss was having the perfect prom until she found her BFF and boyfriend making out in the back of a limo. Bad girl Jolene wouldn’t be caught dead at the prom, yet here she is, trussed up in pink ruffles, risking her reputation for some guy - some guy who is forty minutes late. And shy, studious, über-planner Meg never counted on her date’s standing her up and leaving her idling in the parking lot outside the prom. Get ready for The Anti-Prom, Abby McDonald’s hilarious, heart-tugging tale about three girls and one unforgettable prom night.
1 Vote

Three girls have spent their whole high school years without saying a single word to one another. However, all of that will change on this disastrous prom night. Bliss was having a perfect prom...until she found her boyfriend and her best friend in the back seat of their limo making out. Jolene is the bad girl with the bad reputation, even though the rumors aren't all true. She wouldn't be caught dead at prom, especially in pink ruffles. Yet, she's there waiting for a guy that's almost an hour late.