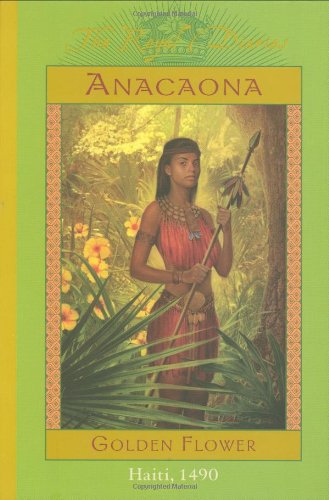 Edwidge Danticat, the award-winning, best-selling author of THE FARMING OF BONES and KRIK? KRAK! offers a powerful addition to The Royal Diaries series with the story of Haiti's heroic queen Anacaona.With her signature narrative grace, Edwidge Danticat brings Haiti's beautiful queen Anacaona to life. Queen Anacaona was the wife of one of her island's rulers, and a composer of songs and poems, making her popular among her people. Haiti was relatively quiet until the Spanish conquistadors discovered the island and began to settle there in 1492. The Spaniards treated the natives very cruelly, and when the natives revolted, the Spanish governor of Haiti ordered the arrests of several native nobles, including Anacaona, who was eventually captured and executed, to the horror of her people.
2 Votes

Quisqueya is the name of the land currently called Haiti, and the time now is 1490. Anacaona is a young lady, and heir with her brother Behechio to the throne of Xaragua, a section of Quisqueya. Anacaona gets her hair cut off, a Native American ritual sending her into adulthood. Now that she is in adulthood, she can marry. Caonabo', the chief of the land of Maguana, which is a different section of Quisqueya, is looking for a wife, and he chooses Anacaona. The leader of Xaragua accepts, hoping to extend the friendship with Maguana.

What's this?
Anacaona review by AW

This book is mainly about a girl named Anacoana who is inline to be the next ruler of Xaragua with her brother. She goes through childhood, and becomes a young adult. From there on, she falls in love and gets married. As she is settled down as a wife and has a child, strange men with white skin visits one of her neighboring tribes and terrorizes the ruler. Anacoana's husband kills the White men but fear of the White men was still there. Anacoana hopes that when her daughter grows up, the threat of the White men will be gone.