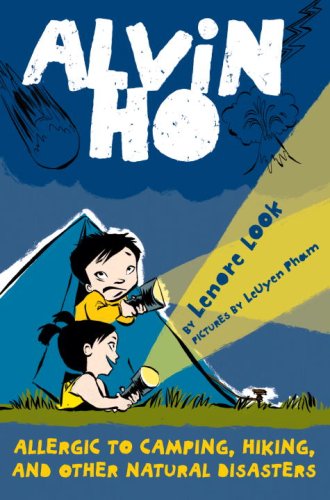 Alvin Ho: Allergic to Camping
LeUyen Pham, Lenore Look
Here's the second book in the beloved and hilarious Alvin Ho chapter book series, which has been compared to Diary of a Wimpy Kid and is perfect for both beginning and reluctant readers. Alvin, an Asian American second grader who's afraid of everything, is back, and his worst fear has come true: he has to go camping. What will he do exposed in the wilderness with bears and darkness and . . . pit toilets? Luckily, he’s got his night-vision goggles and water purifying tablets and super-duper heavy-duty flashlight to keep him safe. And he’s got his dad, too. From Lenore Look and New York Times bestselling illustrator LeUyen Pham comes a drop-dead-funny and touching series with a truly unforgettable character.“Shares with Diary of a Wimpy Kid the humor that stems from trying to manipulate the world.” —Newsday “Alvin’s a winner.” —New York Post
1 Vote

This is a funny book about Alvin Ho, a second grader, who is afraid of everything. When his father suggests going on a camping trip, Alvin is terrified. He asks his brother, Calvin to help him be less afraid. Calvin orders special camping equipment, including night vision goggles. The camping trip was filled with some unexpected moments and Alvin learned to overcome his fears. In the end, he actually enjoyed it.