All Our Pretty Songs 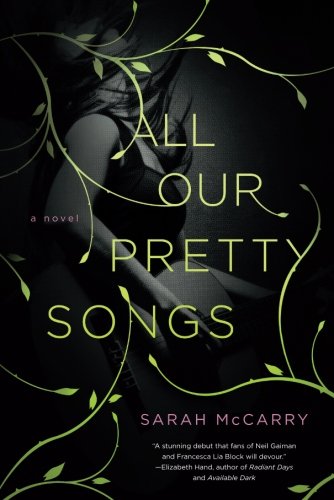 All Our Pretty Songs
Sarah McCarry
This is a story about love, but not the kind of love you think. You'll see…In the lush and magical Pacific Northwest live two best friends who grew up like sisters: charismatic, mercurial, and beautiful Aurora, and the devoted, watchful narrator. Each of them is incomplete without the other. But their unbreakable bond is challenged when a mysterious and gifted musician named Jack comes between them.His music is like nothing I have ever heard. It is like the ocean surging, the wind that blows across the open water, the far call of gulls.Suddenly, each girl must decide what matters most: friendship, or love. What both girls don't know is that the stakes are even higher than either of them could have imagined. They're not the only ones who have noticed Jack's gift; his music has awakened an ancient evil―and a world both above and below which may not be mythical at all. We have paved over the ancient world but that does not mean we have erased it. The real and the mystical; the romantic and the heartbreaking all begin to swirl together in All Our Pretty Songs, Sarah McCarry's brilliant debut, carrying the two on journey that is both enthralling and terrifying. And it's up to the narrator to protect the people she loves―if she can.
2 Votes

All Our Pretty Songs features two best friends: beautiful, flighty Aurora and the loyal narrator who loves her more than anything. The girls are like sisters, inseparable and completely devoted to each other. When the narrator meets Jack, an enigmatic musician, she's afraid he'll leave her for Aurora. But what she doesn't realize is that Jack has introduced the fantastical into her and Aurora's world. Can she save Aurora and Jack from the mythical evil that threatens to overwhelm them?

What's this?
All Our Pretty Songs review by speedreader789

All Our Pretty Songs by Sarah McCarry was a book about two girls who grow up like sisters.  They have completely different personalities but neither have a father.  Aurora is beautiful and outgoing, while the narrator keeps to herself and dresses however she wants.  The girls have been best friends forever, and then Jack comes.  Aurora has already dealt with too much loss and can't stand to lose her best friend as well.  This is a story about relationships, friendships and how to balance them all.