Alien Invasion and Other Inconveniences 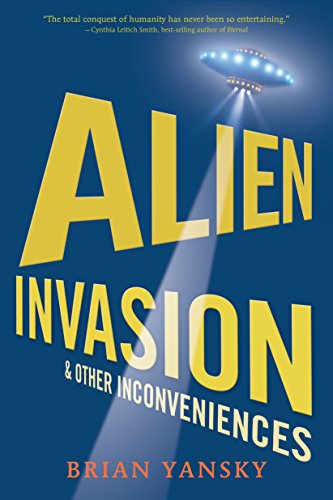 Alien Invasion and Other Inconveniences
Brian Yansky
A polite race of telepathic killer aliens, a ten-second world conquest, and one teenage boy collide in this wry, gutsy adventure. (Ages 14 and up)Jesse is in history class when a formidable, efficient race of aliens quietly takes over the earth in less time than it takes him to brush his teeth. Most humans simply fall asleep and never wake up. In moments, everyone Jesse knows and loves is gone, and he finds that he is now a slave to an inept alien leader. On the bright side, Jesse discovers he’s developing telepathic powers, and he’s not the only one. Soon he’s forging new friendships and feeling unexpectedly hopeful. When a mysterious girl appears in his dreams, talking about escaping, Jesse begins to think the aliens may not be invincible after all. But if Jesse and his friends succeed, is there anywhere left to go? Brian Yansky offers a funny, grim novel packed with everything boys and sci-fi fans love: aliens, humor, action, and a healthy dose of triumph.
2 Votes

Tweet
Alien Invasion and Other Inconveniences review by R. Mae

The earth has been invaded by slave trading aliens, who can kill humans with a simple thought. Jesse is one of the few people who can ‘hear’ the aliens. He has telepathic abilities that make it possible for him and his friends to protect themselves from them. When they discover that the aliens are going to kill them all, Jesse and his friends escape in search of a rebellion. It takes flying a ship, losing people he loves,  and trusting the enemy for Jesse to finally realize who he really is.

What's this?
Alien Invasion and Other Inconveniences review by vbobrocks

Have you ever wondered what it would be like to be enslaved by small green aliens with immense telepathic abilities who conquered the world in ten seconds?  Well, neither had I until I picked up Brian Yansky’s Alien Invasion and Other Inconveniences.  Jesse, a seemingly normal teenager, finds himself among the few humans left alive on the Earth after the aliens, the Sanginians, have completed their invasion of the planet, killing everyone without enough telepathic powers to withstand their means of mental communication.  All of the still living humans, or produ