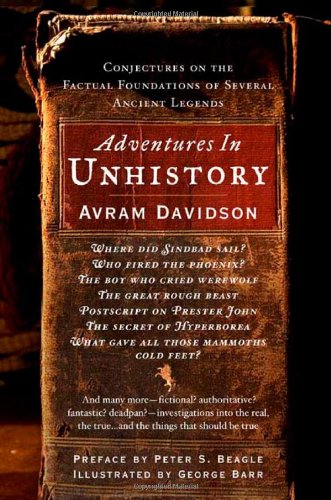 Adventures in Unhistory
Avram Davidson
* Where did Sinbad Sail?* Who Fired the Phoenix?* The Boy Who Cried Werewolf* The Great Rough Beast* Postscript on Prester John* The Secret of Hyperborea* What Gave All Those Mammoths Cold Feet? And many more--fictional? authoritative? fantastic? deadpan?--investigations into the real, the true…and the things that should be true PREFACE BY PETER S. BEAGLEILLUSTRATED BY GEORGE BARR "Although the wombat is real and the dragon is not, nobody knows what a wombat looks like and everyone knows what a dragon looks like." Not a novel, not a book of short stories, Adventures in Unhistory is a book of the fantastic--a compendium of magisterial examinations of Mermaids, Mandrakes, and Mammoths; Dragons, Werewolves, and Unicorns; the Phoenix and the Roc; about places such as Sicily, Siberia, and the Moon; about heroic, sinister, and legendary persons such as Sindbad, and Aleister Crowley, and Prester John; and--revealed at last--the Secret of Hyperborea. The facts are here, the foundations behind rumors, legends, and the imaginations of generations of tale-spinners. But far from being dry recitals, these meditations, or lectures, or deadpan prose performances are as lively, as crazily inventive, as witty as the best fiction of the author, a writer praised by Gardner Dozois as "one of the great short story writers of our times." Who, on the subject of Dragons, could write coldly, dispassionately, guided only by logic?  Certainly not Avram Davidson. Certain facts, these facts, deserve more than recitation; they deserve flourish, verve, gusto, style--the late, great Avram Davidson's unique voice.  That prose which, in the words of Peter S. Beagle's Preface to this volume, "cries out to be read aloud."
1 Vote

Adventures in Unhistory is a collection of mini-lectures that deal with the fantastic: from dragons to mermaids to the travels of Sinbad. Davidson takes on the task of providing the facts of popular myths. As he presents the details that make each legend plausible, he interjects little quips and anecdotes that liven the narration and makes each scholarly essay enjoyable and easy to process. The essays teach a significant amount of history to the reader, but present it in such a way that the knowledge is transferred painlessly, unlike reading a history textbook.