Abby Carnelia's One and Only Magical Power 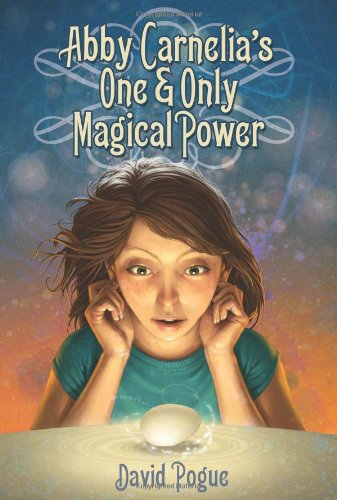 Abby Carnelia's One and Only Magical Power
David Pogue, Antonio Javier Caparo
SILLY MAGICAL POWERS, KIDS ON THE RUN. In a whimsical debut novel from the populartechnology writer.One day, Abby Carnelia, ordinary sixth grader, realizes she has a magical power. Okay, it's not a fancy one (she can make a hard-boiled egg spin by tugging on her ears). But it's the only one she has, and it's enough to launch her into an adventure where she meets a host of kids with similarly silly powers, becomes a potential guinea pig for a drug company, and hatches a daring plan for escape.Kids will be dying to unearth their own magical powers after reading this whimsical debut by tech personality David Pogue.
1 Vote

Tweet
Abby Carnelia's One and Only Magical Power review by MLoza

Superman has x-ray vision! Spiderman can shoot spider webs from his hands! Wonder Woman can fly! What can Abby Carnelia do? Abby can make an egg spin by tugging at her earlobes! Abby can't explain how she makes the egg spin. Abby checks the internet and every magic book in her library. Abby decides she has a magic power. To find out more about her magic power, Abby finds an ad in the newspaper for "Cadabra Magic Camps for Children". Camp Cadabra offers help for learning magic tricks and unexplained phenomena. Abby is interested and signs up to go.