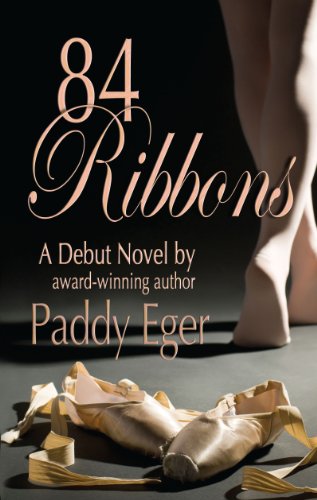 84 Ribbons: A Dancer's Journey (Ballet Trilogy-Book 1)
Paddy Eger
The Debut novel by award-winning author Paddy Eger 84Ribbons-FrontCover-WebMed A young dancer's realizes her life long dream, if only for a while. Seventeen year old Marta Selbryth realizes her dream of becoming a professional dancer when the Intermountain Ballet Company in Billings, Montana invites her to join their 1957 season. As Marta's new life unfolds, she must learn to face not only the successes of dancing in the corps de ballet, but the challenges and setbacks that might crush the dream she's had for so long. After a couple of mishaps, Marta settles into life in a boarding house located near the ballet company. Her landlady, Mrs. B., is friendly, reduces her rent when Marta's offers to bake for the boarder and later allows her to use the basement as a practice studio. The two male boarders are supportive; Carol, a fellow boarder, ignores her. Marta spends her free time practicing when she's not spending time with her new friends Lynne and Bartley,her fellow corps dancers. Their time together becomes an important lifeline through their first year. Madame Cosper, the artistic director, is a demanding woman. Marta begins their association poorly when she makes a disastrous choice. Expecting expulsion, Marta receives a second chance in the form of dancing the unpopularcharacter roles during the fall and winter performances.Marta determines to dance every role with confidence in hopes of proving to Madame that she's up for every challenge. Steve, a young college man and a reporter, spots Marta when he's assigned to write an article about ballet for the local paper. He's attracted to her and begins his pursuit.Over the months ahead, he becomes her tour guide of the area and attempts to convince Marta to be his girl. But her steadfast focus is ballet and some of her adventures with him lead to problems with Madame Cosper. Shortly after Christmas, everything changes for Marta, Bartley and Steve. Significant events permanently influence their lives. Each mustdeal with exhilaration and heartbreak as well as frustration and changes that test their ability to cope.
3 Votes

When seventeen-year-old Marta finally enters the world of professional ballet in 1957, it is not what she expects. And when she walks in late without her clothes or bags because the train lost them, Madame Cosper, from the Intermountain Ballet Company, seems to hate her from the start. Despite her many setbacks, she befriends two fellow dancers as well as gets herself into a deeply complicated yet fun relationship with a college reporter. As her friendships grow and her life becomes dramatic, can she stay on track and continue to dance safely and keep her boyfriend from leaving her?

84 Ribbons is a wonderful story about a dancer and her journey through the professional world of ballet. After arriving in Billings, Montana to start her career as a professional ballerina, Marta Selbyrth is in for several not-so-welcome surprises. Once she secures a place to live, Marta begins her dancing journey. It is so full of ups and downs that it soon becomes a roller coaster.