Michael Okon is an award-winning and best-selling author of multiple genres including paranormal, thriller, horror, action/adventure, and self-help. He graduated from Long Island University with a degree in English, and then later received his MBA in business and finance. Coming from a family of writers, he has storytelling in his DNA. Michael has been writing from as far back as he can remember, his inspiration being his love for films and their impact on his life. From the time he saw The Goonies, he was hooked on the idea of entertaining people through unforgettable characters.

Michael is a lifelong movie buff, a music playlist aficionado, and a sucker for self-help books. He lives on the North Shore of Long Island with his wife and children.

Michael Okon returns for another LitPick tell-all, on the heels of his latest release, Monsterland Reanimated, the second book in Okon's thriller series set in one, um, monster of a theme park!

How did writing Monsterland Reanimated differ from your experience when drafting Monsterland, the debut in your series? Well, the park was destroyed. I needed to create a world that was post-Monsterland, so I ended up with the post-apocalyptic background where the world went to hell in a handbasket. Kind of like today, minus the deliveries and air travel.

Which monster character in your books do you feel is the most terrifying? Without giving too much away, I could say The Glob is the scariest—a formless mass that sucks the energy out of anything it touches. You’re dead in seconds. But…it reanimates some interesting creatures to life. So a person running from it will have the life sucked out, and the energy will be transferred to one of antagonist Vincent's minions.

Which monster do you feel is the most endearing? Is there one you'd be comfortable inviting to dinner? I’m not too keen on hanging out with any monsters, but if I had to choose, it would be Melvin, the werewolf. He’s kind. He’s sympathetic, and he just wants to be loved. I’d hang out with him anytime.

Since the Monsterland series is set in a theme park, are you a thrill ride enthusiast? Great question. Oh, yes. I’m more of a family-friendly coaster kind of guy. I am quite scared of certain rides. Don’t like anything that spins, especially in the dark. Drops are kind of okay, but it depends on how deep the drop is. I took all my fears and put them down on paper in what I think is the world’s scariest theme park—Monsterland.

Do you have a favorite rollercoaster or amusement park? I’m a sucker for all things Disney. Love the Magic Kingdom. My favorite coaster is Splash Mountain, even though it’s not really a coaster.

If the Monsterland series were to become a movie, which actor would you want to see cast as main character Wyatt? Logan Lerman or Finn Wolfhard is Wyatt.

If you were to assign a theme song to Monsterland Reanimated, what would it be? Love this question. "Kickstart My Heart" by Motley Crue. It’s basically one big chase scene in a book, and that song is perfect.

"Monsterland Reanimated is a great ride of a read!" —LitPick Review

LitPick recently interviewed Michael Okon, creator of the Monsterland series of books. Yes, he's the author who dreamed up a bone-chilling theme park that's crawling with zombies, werewolves, and vampires...oh, my!

When writing your first draft, do you like to write by hand or on the computer? Computer—always.

What was your favorite childhood book? There’s a Monster at the End of this Book.

What is the most exciting part about being an author? Creating a universe and having no limit to your imagination. You’re playing God to these characters while telling an interesting story. There is nothing like it in the world.

What is the most challenging part about being an author? Getting millions of people to read your book.

What are three writing tips you've found beneficial? 1) Write what you know and interests you. 2) Read as much as you can and steal (don’t pay homage) from your favorite authors—by making it your own! 3) Research, research, research. I can’t stress enough, research your subject to death before you write Chapter 1.

What do you like to do when you're not writing? Spending time with my wife and kids. Golfing with my brother. Cooking. Watching movies and reading. Current obsession—getting lost in YouTube and learning about anything I want. 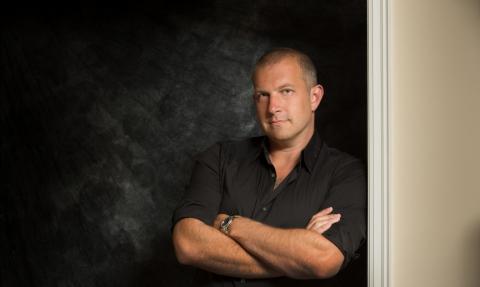