Road Rash author, Mark Huntley Parsons, joins LitPick today for Six Minutes with an Author! Mark has been a drummer since he bought a used drum set in junior high, and hasn’t stopped playing since.  While Road Rash is Mark’s debut novel, he’s a contributor for Modern Drummer magazine and has written non-fiction books on audio and music-related topics.

I started writing non-fiction several years ago—a couple of non-fiction books and a couple hundred magazine articles. And of course the “obligatory bad first novel,” which is still in the drawer(!). My wife is a children’s author (we share an office), and I joke that I’d noticed she laughed a lot more than I did when we were working on our respective projects. I’m a drummer (and have been since I was young), and I’d been kicking around the idea of writing a YA novel about a teen-age musician going on the road with a group of slightly older guys and girls.  I dove in and found I absolutely loved the writing process. (Don’t tell my editor, but I’d write for free… heck, I’d pay to write!) That book became Road Rash—which was published by Knopf/Random House and named to the YALSA 2015 Best Fiction for Young Adults list—and I’ve been writing fiction ever since.

The first writers I fell in love with were the classic SF authors…Heinlein, Bradbury, Ellison, etc. But really, I’m inspired by anyone who’s working at their full capacity in whatever their chosen field is, whether that's Ludwig Beethoven or Neil Peart or Meb Keflegzighi.

I enjoy the unexpected, the understated, the under-explained. I like it when the author trusts the reader will pay attention and pick up on the subtleties of the work, without having to resort to the “As you know, Bob” type of dialogue or exposition.  I like contemporary novels, works set in a believable future, wild fantasies, or even comic book tales.  Really, I can fall in love with anything that has self-consistent characters that feel real enough that I actually care what happens to them.

I love intelligent, non-stereotypical characters. The kind of people you’d want as friends. Everyone has their struggles and imperfections (perfection is boring!) and I’m not interested in Hollywood endings, but I like books where there is at least the possibility of light at the end of the tunnel.

1.  Trust yourself and your characters… if they become real and start talking to you, listen!

2.  Follow your passion. I believe the best work is done by people doing what they most want to do, not by people trying to follow a trend or chasing the latest fashion. If you don’t care deeply about your characters and their story, how can you expect anyone else to?

3.  Involve your subconscious in the process as much as possible. It’s good to know where you’re going, but I don’t outline a story to within an inch of its life. Leave room for some organic elements to crop up.

4.  The first rule of getting published is “Have a great manuscript.” You see a lot of “cart before the horse” with aspiring writers. Think about your characters and their story when you’re writing. Think about editing after the initial writing is done. And don’t even begin to think about publishing until you’re really happy with the first two (the writing and the re-writing).

With writing, I believe most of the important stuff happens away from the keyboard. For me, the best plot developments happen when I’m otherwise distracted with some mundane activity that requires just enough attention to distract my conscious mind so my subconscious can come out and play.  So for me, the best ‘idea factory’ is running down some back country road or trail, with several miles behind me and several more until I’m back home.  That’s where I get my best ideas.

As far as the actual writing (once I’ve done the above and have a clue as to where I’m going), I’m pretty good anywhere (as long as I have earplugs if the background noise gets too high!).  But my favorite place is our office, where everything is so familiar that it just disappears and you’re left with yourself and the story. Beyond that, I also like writing in a coffee shop occasionally. The proximity of other people—but without a lot of direct interaction—seems to free up part of the brain.

I play in a few different bands—and I know this sounds incredibly corny—but my favorite is a rock band with my wife and our two college-age sons. We’re loud and loose and over-energetic and under-rehearsed, but it’s such a good time! We do an annual Christmas Bash with a hundred or so of our closest friends, and I have to say it’s my favorite night of the year, hands-down.

If you can do what you love—with people you love—then you can’t ask for anything more. I believe this applies to writing as well as everything else in life. (Editor’s Note: Mark has included a picture of himself playing with his family band.)

Mark, thank you for spending six minutes with LitPick! You are a multi-talented individual, and it sounds like you have a very talented family as well! Thank you for your great advice for aspiring authors! 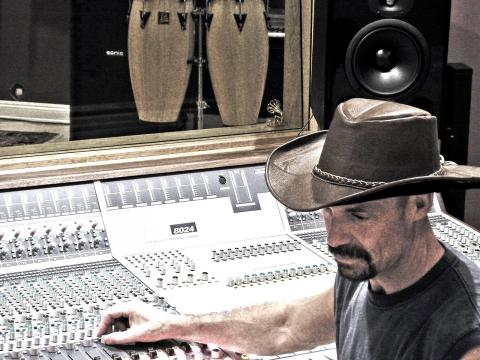