Be sure to check out the book giveaway at the end of the interview.

HOW TO WRITE A FUN, ACTION-PACKED ADVENTURE BOOK

Let me start off by saying I consider myself to be an authority on three subjects:

1.)  The television series Agatha Christie’s Poirot, which I have watched so many times that I occasionally think in a funny Belgian accent.

2.)  What constitutes an appropriate bedlinen thread count. Do not argue this subject with me. You will lose.

3.)   Pretending to be an authority on things I know very little about.

And now, please allow me to explain to you the definitive method for writing a fun, action packed adventure book.

Some authors might suggest plotting out everything ahead of time. They might suggest creating a basic outline, where you list the important story points, the dramatic twists and turns, and perhaps write some interesting details about the main characters as well. And maybe those authors have a point. But I prefer to employ a different method. I like to approach the story blindly, as though I’m reaching down into a dark storm drain with the hopes of retrieving something valuable and interesting (or at least something that isn’t slimy and gross). I like to be surprised by what happens next in an adventure story. I figure that if what happens next is a surprise to me, it’ll be a surprise to the readers as well. That is my basic philosophy for writing. Some might call it laziness, but it’s not. It’s a philosophy. Totally different.

So, I’ll sit down in front of my computer, crack my knuckles like a writer from an old timey cartoon, and then I’ll proceed to stare at a blank screen for roughly four to six hours before calling it a night.

The next morning, I’ll pour myself a cup of coffee, sit back down in front of my computer, crack my knuckles one more time, and then pour a second cup of coffee because I’ve likely spilled the first one. After cleaning the mess (and apologizing to my wife, because it’s her desk that I’ve spilled my coffee upon), I’ll just start typing. What do I type, you ask? Well, I’ll start by exploring the letter keys at the top row of the keyboard. Q W E R T Y U I O P. Those are some great letters to get you started. Think of all the great sentences that can be written with those letters. Here’s one that I just came up with: “Try to tiptoe quieter, Peter, woot woot?” Does that sentence mean anything? Not really. But who cares? You’ve now typed your first sentence, so you can crack your knuckles (writers’ knuckles are notoriously cracky), and move on to the second one. Maybe try using some of the other letter keys, like G, or B, or my all-time favorite key: N.

And that’s about it. Keep typing sentence after sentence, and the next thing you know, you’ll have a beautiful and exciting adventure novel just waiting for a worthy publisher or agent’s eye.

Okay. The key to writing a fun, action-packed adventure book is simply taking the time to sit down, ignoring all the wonderful and terrible distractions of the world, and then just writing it. Disappointing advice? Perhaps. I’m a bit of an authority on giving disappointing advice as well. But that’s all the advice I can give. There are countless methods and philosophies and tips from writers of adventure books with much more talent and success than me, and almost every single one I’ve read has stressed the importance of discipline.

I’ve always found writing to be a rather unique endeavor, because while it’s fun to say you’re a writer (people think you have depth, even when you write silly kids’ fiction about sassy monkeys and boys who get their heads stuck in pie), sometimes the actual act of writing can be an utter chore because of the discipline it requires.

Writing an adventure novel is no different than writing a comedy novel, or a mystery novel, or a fantasy novel. You just have to do it. And if you’re aware of the nuances of the adventure genre (if you’re not, go watch an Indiana Jones movie, and then when you’re finished, watch the movie Rushmore -that’s not an adventure film, I just think it’s awesome) you shouldn’t have much trouble.

Even though I have no evidence to support this, I believe that everyone has at least one idea for an amazing adventure in their heads. I believe it’s human nature -who doesn’t daydream about adventure and excitement? Who hasn’t fantasized about discovering something valuable in the woods, or travelling to a remote area with a friend, or uncovering an old treasure map in an attic? It’s just a matter of forcing yourself to sit down and concentrate so you can allow one of those exciting fantasies that’s been brewing in your head for years the opportunity to pour from your fingertips to the keyboard. If I can do it, then anyone can do it.

In conclusion, if you’re purchasing bed linens with a thread count below 600, which are finished with chemical processes, and don’t possess a balanced weave, then you might as well be sleeping on an old onion sack.

· A copy of The Splendid Baron Submarine, by Eric Bower

Publisher’s Synopsis: Waldo “W.B.” Baron is back with another amazing adventure in another incredible invention! Pirate treasure? A clandestine meeting? A terribly rude monkey with personal boundary and hygiene issues? Two of those things sound like a dream come true to W.B, whose clever inventor parents are hired―by the Vice President!―to go on a super secret and intensely important treasure hunt to repay a national debt. If only it weren’t for that lousy, rude monkey, it would be the beginning of a perfect adventure. But at least it isn’t squirrels…

The treasure hunt gives the Baron family the opportunity to use their exceptional steam-powered submarine, freshly biggened and ready for adventure! But things are seldom straightforward for the eccentric Baron family, and this treasure hunt is no exception. W.B.’s trademark bad luck has him suffering monstrous marine misfortune and marauding monkey misery.

Can the Baron family embark on their newest adventure without the eggy and depressing Aunt Dorcas? Will the Barons find the treasure they seek? Will they save the country from financial ruin? Where does the monkey fit in, anyway? Do we like asking questions? Not really, but inside you’ll meet someone who likes asking questions and then answering them (despite his claims to the contrary, he really does like it).

Oh, did we mention the pirate’s curse?

Available on Barnes and Noble: https://www.barnesandnoble.com/w/the-splendid-baron-submarine-eric-bower/1126345064

Eric Bower is the author of The Bizarre Baron Inventions series. He was born in Denville, New Jersey, an event of which he has little recollection, yet the people who were there have repeatedly assured him that it happened. He currently lives in Pasadena, California. His favorite type of pasta is cavatappi, his favorite movie is The Palm Beach Story, and he is the proud recipient of a “Beanology Degree” from Jelly Belly University in Fairfield, California. His wife and family have told him that the degree is nothing to be proud of, since “It’s not a real degree. You know that . . . Right?” and “Eric, they literally give them to everyone who visits the Jelly Belly factory,” but he knows that they’re all just jealous. 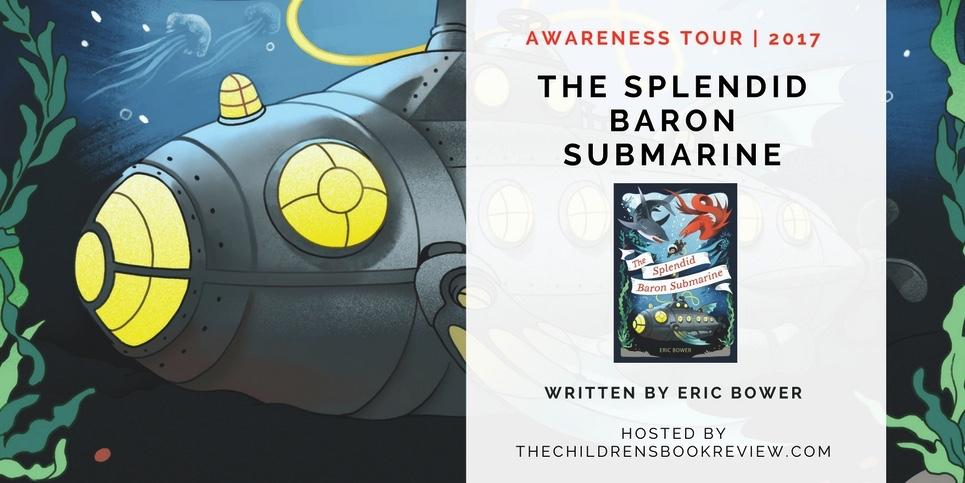