LitPick has partnered with Michael Okon and The Children’s Book Review to bring you an interview with author Michael Okon. His newest book in the Monsterland series, Monsterland Reanimated, just released in April. Be sure to check out the giveaway opportunity at the end of the interview.

I must outline all of my works before I write Chapter 1. I have to outline all my character and story arcs every time.

All my characters are based on characteristics of me or people I’ve known throughout my life. I don’t portray anyone negatively, but I take their flaws and tend to accentuate them.

***What do you do when you get writer’s block?

Watch a movie I love. That almost always does the trick.

***If you could live in a book’s world, which would you choose?

The Lord of the Rings, after Frodo destroys the Ring of course. To be more specific, The Shire.

Hopefully Monsterland, but in keeping with the theme – Lord of the Rings.

***If you could have lunch with one other author (dead or alive), who would it be?
Michael Crichton. Hands down.

Enter For A Chance To Win A Monsterland Reanimated Prize Pack!

Giveaway open to residents of Canada and the fifty United States and the District of Columbia who are 13 and older.

Publisher’s Synopsis: After Monsterland has been destroyed, the entire world is thrown into chaos. Wyatt Baldwin and his friends must go beyond the boundaries of their small town to reestablish contact with the outside world. During their journey they discover a new threat released from the bowels of the defunct theme park. The danger of werewolves, vampires and zombies pale in comparison to an army of relentless mummies, Vincent Conrad’s reanimated monster and the menace of a life-sucking ooze they call The Glob.  Will Wyatt and his friends survive when they reenter the scariest place on earth?

Michael Okon is an award-winning and best-selling author of multiple genres including paranormal, thriller, horror, action/adventure and self-help. He graduated from Long Island University with a degree in English, and then later received his MBA in business and finance. Coming from a family of writers, he has storytelling is his DNA. Michael has been writing from as far back as he can remember, his inspiration being his love for films and their impact on his life. From the time he saw The Goonies, he was hooked on the idea of entertaining people through unforgettable characters.

Michael is a lifelong movie buff, a music playlist aficionado, and a sucker for self-help books. He lives on the North Shore of Long Island with his wife and children. 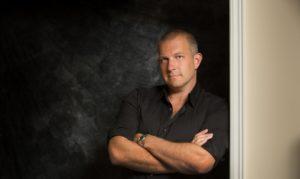