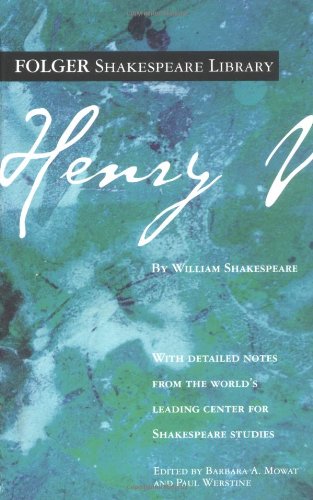 Henry V
William Shakespeare
Henry V is Shakespeare’s most famous “war play”; it includes the storied English victory over the French at Agincourt. Some of it glorifies war, especially the choruses and Henry’s speeches urging his troops into battle. But we also hear bishops conniving for war to postpone a bill that would tax the church, and soldiers expecting to reap profits from the conflict. Even in the speeches of Henry and his nobles, there are many chilling references to the human cost of war. The authoritative edition of Henry V from The Folger Shakespeare Library, the trusted and widely used Shakespeare series for students and general readers, includes: -Freshly edited text based on the best early printed version of the play -Full explanatory notes conveniently placed on pages facing the text of the play -Scene-by-scene plot summaries -A key to the play’s famous lines and phrases -An introduction to reading Shakespeare’s language -An essay by a leading Shakespeare scholar providing a modern perspective on the play -Fresh images from the Folger Shakespeare Library’s vast holdings of rare books -An annotated guide to further reading Essay by Michael Neill The Folger Shakespeare Library in Washington, DC, is home to the world’s largest collection of Shakespeare’s printed works, and a magnet for Shakespeare scholars from around the globe. In addition to exhibitions open to the public throughout the year, the Folger offers a full calendar of performances and programs. For more information, visit Folger.edu.