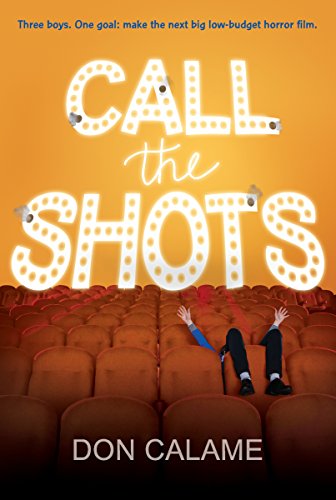 Call the Shots
Don Calame
And . . . action! As the uproarious trio returns, sensitive Sean takes the spotlight — scripting a low-low-budget film while fielding unexpected female fans.Coop is cooking up another sure-misfire scheme (big surprise), and this time the comedy plays out from Sean’s point of view. What’s the new master plan? Making a cheapo horror movie guaranteed to make Coop, Sean, and Matt filthy rich! It’s a terrible idea, and Sean knows it. But he actually is desperate for cash — and for a way to wipe that big fat L off his girlfriend-less forehead. But when he agrees to write a script about the attack of zombie-vampire humanzees, he has no idea just how powerful a chick magnet this movie will be. Suddenly Sean is juggling not one but three interested ladies. There’s his accidental-girlfriend-turned-psychotic-stalker, Evelyn. There’s the wicked hot actress from drama class, Leyna, who seems willing to do anything to land the starring role. And even his twin sister’s gothed-out best friend, Nessa, is looking at Sean in a whole new way. Will any of them wind up as Sean’s true leading lady? Will Sean stop being a doormat and finally start calling the shots?