The Boy Who Climbed into the Moon 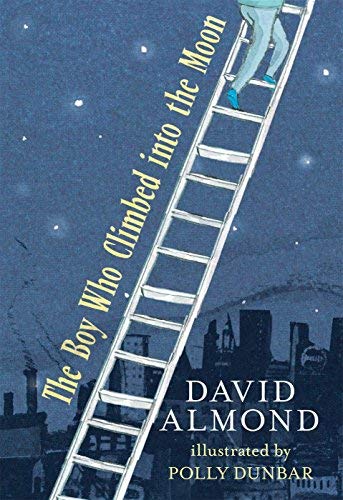 The Boy Who Climbed into the Moon
Polly Dunbar, David Almond
Crackpot notions, community spirit, and sky-high aspirationstransform a quiet boy’s life in this whimsical tale from the stellar team of David Almond and Polly Dunbar. (Ages 8-12)There are some strange ideas floating around in Paul’s apartment block. There’s Mabel, who now calls herself Molly and whose brother hides under a paper bag. Then there’s Clarence, the poodle who thinks he can fly. But the strangest notion of all is Paul’s. You see, Paul believes that the moon is not the moon but a great hole in the sky. And he knows that sausages are better than war. How on earth (or not) will he find out if he is bonkers or a genius? With a few equally bonkers (or genius) helpers and a very long ladder, that’s how! From a master of magical realism and a celebrated artist comes another delightfully outrageous expedition.