I grew up in Dearborn, Michigan, not far from Olivia's farm and boarding house. I spent years researching this story - enjoying the challenge of trying to recreate daily life in another time and place - and based many details (including how Mourning got his name) on letters and journals passed down through my family. I received a great deal of insight from my sister Martha, who lived in a modern log home, hunted her own land, and was as independent and stubborn as Olivia. I have lived most of my adult life in Israel, working as a secretary, librarian, agricultural laborer, Hebrew-English translator, English teacher, technical writer, and proposal writer.
My blog: yaelpolitis.wordpress.com

Author Yael Politis joins LitPick for Six Minutes with an Author! Yael is the author of The Lonely Tree and the three books of the Olivia Series: Book 1 0livia, Mourning, Book 2 The Way the World Is and Book 3 Whatever Happened to Mourning Free?

Of the books I have written, The Lonely Tree is my favorite

I can't name one book by another author as a favorite but there are many I could read over and over - The Poisonwood Bible, Empire Falls, The Help, The L-Shaped Room. A Tree Grows in Brooklyn. For fun I like Ken Follett and P.D. James.

Take your ambition seriously. Put the time in and learn the craft. Be professional. Carpenters don't build wobbly tables and insist "That's just my style." Don't you write sloppy prose full of typos, grammatical errors, and incorrectly tagged dialogue and say, "That's what editors are for."

Don't wonder if you have enough inspiration, or imagination, or talent or whatever you call it -- that is not the problem. We are bombarded by stories and characters every day. Take your pick. What you should be wondering is if you have what it takes to get it done, keep your butt in the chair and get the words down on paper and then correct them again and again and again.

In theory, longhand, sitting in a beautiful garden in Rome, on a warm sunny day (a glass of wine would also be welcome).

In fact, 99% of my writing is done at my computer in my not-so-lovely living room drinking cup after cup of bad coffee. Walking is the best way for me to work out ideas.

Writing is the best possible hobby - any time, any place you can be thinking through your plot and characters. You are never bored - Stuck in the line at the supermarket? Gather material for writing a scene about that.

Yael, thank you very much for joining us from Israel! You have given us one of the most interesting stories so far about how you got started writing!

Description
In 1944 in British Mandate Palestine, Tonia’s parents take her and her brother and sister to live on Kfar Etzion, an isolated and struggling religious kibbutz south of Jerusalem. Fifteen-year-old Tonia does not believe that her father’s dream of establishing a Jewish state will ever come to be. Life on the kibbutz is harsh, and Tonia dreams of security and a little comfort, though material wealth for its own sake is not what she longs for. She wants something simple – to be able to bring up her own children under a roof of her own, in a place where they won’t feel constantly threatened.  She is determined to seek this different life in America, as soon as she is old enough - even though that means turning her back on her love for Amos Amrani, a handsome young Yemenite who belongs to the Jewish underground.

Much of this novel takes place in Kfar Etzion, during its establishment, siege, and fall to the Arab Legion during hostilities immediately prior to Israel’s War of Independence – resulting in the massacre of its surviving defenders.  A later part of the story is set in Grand Rapids, Michigan, where Tonia tries to find her new life.

This is one of very few English novels that take place in British Mandate Palestine and the only one that tells the story of Kfar Etzion. While the characters are fictional, historical events are accurately portrayed.  The Lonely Tree, however,  does not read like a history book. It is a character-driven love story with no political agenda.

The Lonely Tree of the title still stands today.

Description
Forced to live with her brother and the overbearing woman who will soon be his wife, Olivia Killion is determined to gain her independence by inheriting 80 acres in far off Michigan. Her father’s will bequeathed the land to whichever of his offspring would put in a crop and stake a claim to it. As Olivia insists, “I’m sprung off him just as much as Avis or Tobey.”

She has a friend who would make a perfect partner for this endeavor. Mourning Free knows how to run a farm, having worked many years for local farmers. More importantly, Olivia has complete trust in him and no fear of a romantic entanglement developing between them. Mourning will put in the crop for her and she will then help him buy land of his own.

The problem: Mourning is black, the orphaned son of runaway slaves, and reluctant to travel and work with a white girl. He especially fears the private agents from the south who patrol the free states, hunting fugitive slaves.

Olivia believes she and Mourning can make their partnership work and they set off together. All goes well, despite the drudgery of survival in an isolated log cabin. Incapable of acknowledging her feelings for Mourning, Olivia thinks her biggest problem is her unrequited romantic interest in their young, single neighbor. Until she is betrayed and violated and her world falls apart.

Strong-willed, vulnerable, and compassionate, Olivia is a compelling protagonist on a journey to find a way to do the right thing in a world in which so much is wrong.

Description
Please note that this is Book 2 of a series. While it can be read on its own, readers who begin with Book 1, Olivia, Mourning, will have a deeper understanding of the characters.

Detroit Michigan, 1842  -  After the devastating trauma she suffered in Olivia, Mourning and finally knowing the reality with which she must deal, Olivia strives to rebuild herself – emotionally, socially, and financially.

She starts a new life in Detroit, the young and exciting city on a river where she has come to feel at home. New friends help the healing process, while she continues her search for the two people she loves, who have disappeared from her life. She finds the greatest solace in helping fugitive slaves escape over the river to Canada. She believes, as one of her new friends says, “In this time and place it is the most worthy thing a person can do.”

Olivia remains a compelling protagonist on a journey to find a way to do the right thing in a world in which so much is wrong.

Whatever Happened to Mourning Free? (Book 3 of the Olivia series)

My Current Work in Progress - Look for it next year

Toward the end of my freshman year in Ann Arbor my roommate dropped The Michigan Daily on my bed and pointed at an ad. For $400 the Israeli Students Association would arrange your flight to Tel Aviv and place you as a volunteer on a kibbutz for the summer.

“You’re forever talking about Israel,” she said. “Why don’t you go

So I did. Back then when an El Al flight landed in Tel Aviv its audio system blared the Theme from Exodus. I felt ridiculous when it brought tears to my eyes and even more so when I got off the plane feeling as if I had come home.

I know the next question. Why? Reincarnation? I have no rational explanation and never spent much time searching for one. The feeling was simply too strong to ignore and I accepted that Israel was where I was meant to be. And the older I get, the more I believe that none of us are as rational as we would like to believe. The important decisions - who we marry, where we live, how we make a living - are often leaps of faith, based on feelings we can’t ignore.

I grew up in Dearborn, Michigan, a city that enjoyed exceptionally good schools and city services -- and was infamous for having the most segregationist mayor in a northern state. One of his oft-repeated quotes: I’m not a racist. I just hate those bastards. When I went back for my 12th high school reunion one of my former classmates confessed to being Jewish. While she was growing up in Dearborn her mother had strictly forbidden her to reveal that fact to anyone.

So, yes, it was an eye-opening journey from Dearborn to Tel Aviv.

Since coming to Israel I have had many jobs, lived in a lot of different places (cities, kibbutzim, and moshavim), and been married to and divorced from two husbands. Life was seldom easy, but I have never regretted making my home here.

The place I lived the longest - and where I raised my children - was in the Katif Bloc in the Gaza Strip. It was there I started to write, on an old Smith-Corona typewriter. I knew the tragic story of what had happened decades earlier, on the eve of Israel’s independence, in a similar bloc of settlements - the Etzion Bloc south of Jerusalem. No one had ever written a fictional account of it, but I felt it was “too big” for me to attempt and turned to other stories.

Then the first intifada broke out and we were - like the settlers of Kfar Etzion - attacked on the roads and under constant threat. But I felt fairly safe; the IDF was there. It made me think again about the people who had chosen to live in Kfar Etzion - and hundreds of other settlements like it - when a Jewish state had seemed like a wild dream. How could they have lived like this but without an army, protected by only a few men and youths with little training and not enough obsolete weapons to go around, and so soon after the Holocaust had made it all too clear that threats of intent to wipe a nation of the face of the earth are not empty? That’s when my first novel, The Lonely Tree, was born. I don’t agree with its heroine, Tonia Shulman, but I understand her perfectly.

I have always kept a strong connection with my family and in writing the Olivia Series am revisiting my roots in Michigan. My ancestors were savers and I finally sifted through the big red box of diaries, letters, deeds, marriage certificates, etc. that for decades had moved with me from apartment to apartment but sat neglected in the corner.

The next book in the series will take me backto Dearborn and I know I will have a great time writing it.

So that’s my schizophrenic life - from the Midwest to the Middle East and back again. 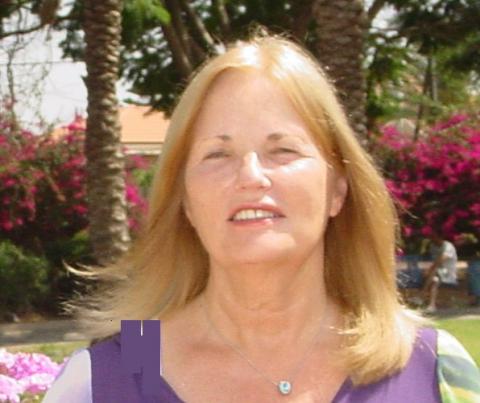