Wanda Fischer has loved baseball since she was nearly eight years old. She's parlayed that into her first novel, which is not necessarily about her favorite team, the Boston Red Sox. Following a nearly 40-year career in public relations/marketing/media relations for not-for-profit and government agencies, she continues to do a folk music show on the Albany, New York National Public Radio affiliate, WAMC, "The Hudson River Sampler," which she's done since 1982. She's a singer/songwriter, plays competitive tennis in her age group, and enjoys reading to first graders in her spare time. She's been married to Bill Fischer, a retired family physician, since 1973; they have three grown children, four--soon to be five--grandchildren.

Joining LitPick for Six Minutes with an Author is Wanda Fischer. She has loved baseball for most of her life, and that passion inspired her to write her first novel, Empty Seats. Be sure to check out the great things our student reviewer has to say about this book (https://litpick.com/review/empty-seats-review-nictaf).

I started writing when I was in the second grade, which was in 1953. I wrote poetry, short stories, and anything I could think of. I had the great opportunity to have outstanding teachers. I was part of the Baby Boom generation, and we had huge classes back then. When I was in the seventh or eighth grade, I tried to write a book, and I found that draft manuscript in the things my mother left behind after she passed away. It was obvious when reading it which authors we were reading in school at the time. For example, I could tell when we were reading Edgar Allen Poe, because the prose I'd written then contained a surfeit of "indeeds!" and "alases!" in the sentences.

Many writers influenced me, but, as a child, I would have to say Walter Farley and his horse books. Then, as I got older, I loved Hemingway, Faulkner, Fitzgerald, Wlla Cather, Sinclair Lewis, Upton Sinclair, and some of the more socially-conscious fiction writers. I also enjoy reading non-fiction. Recently, I read Dennis Lehane's "The Given Day," and I'm still reeling from some of the parts of that book. It's historical fiction, and it had an impact on me because it bases a great deal on the history of the Irish in Boston, which is where I'm from. I felt the same way about Timothy Egan's "Immortal Irishman" for much the same reason.

I enjoy historical fiction. I also enjoy sports, and I think it's amazing when all of those things come together. I like historical fiction because often authors do so much research that they can reveal things to us about historical events that no one ever learns in school. I also like reading books about people who might have been my ancestors, who came to this country from Ireland and Scotland--some illegally (or, as the Irish say, "through the back door").

Advice for people who want to be authors: READ, READ, READ!!! No matter whether you read newspapers (yeah, I know, old school, right?), magazines, blogs, books--you need to read to develop your own style. Even back when I was emulating Poe or Melville, at least I know I was reading. Keep up with current events, because those may give you the foundation 20 years from now for an amazing short story or book. Also, learn grammar! In my mind, there's nothing worse than trying to read something when the writer has no idea of grammar or syntax.

My favorite place to write is the public library. No one bothers me there. Sometimes I write later at night, and then I'm writing on my laptop, sitting in my recliner chair.

When I was young, in the 1960s, I wanted to be a sportswriter. After speaking with a Major League Baseball player back then, I decided it would be too difficult to break through that glass ceiling. Instead, my career took a different path. I also did not go straight through college. My parents ran out of money when I had just finished two years of college, so I got a job and finished college at night while working full-time. When I retired from my "day" job, that's when I finally wrote my first book. It's never too late! "Empty Seats" began as a NaNoWriMo project in November 2015, and I just kept going, then found an editor, and now it's out there. Was it easy? No. Nothing in my life has been easy. Was it worth it? Absolutely.

Wanda, thank you for joining us to share more about yourself, your inspiration, and your book. We love hearing stories about an author’s dedication and determination to chase a dream (no matter the obstacles that arise). What great advice you shared! 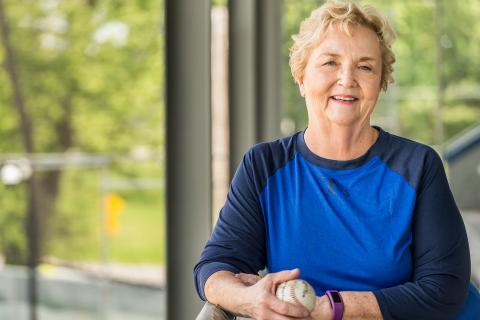