Joining LitPick today for an Extra Credit Interview is Tom Leveen, author of books like Zero, Manicpixiedreamgirl, and Party. His latest book, Hellworld, just released today. Be sure to pick up a copy!

Yes! ...By which I mean, both. I used to never outline, then I discovered the Hero's Journey, and I was blown away by it. I started outlining novels according to the steps in the Hero's Journey and thought I was being so clever and professional. And the books were *terrible*! There was no soul, no joy in the writing. You could feel it on the page. So I ditched the outlines, only to discover that going back to my old method left something to be desired in terms of structure and build. So now I do a hybrid, where I'll start writing whatever comes to mind. If the story goes more than 50 pages or so, I know I've got something to work with and then I'll apply Hero's Journey "on top" of the story and any notes I have, so I get the best of both worlds. You never stop learning, it turns out.

Consciously, yes; I used many friends as the very general basis for some characters in my first novel, PARTY, and even literally forgot to change one of their names in the final manuscript! Embarrassing! I think subconsciously people end up in those stories, too. I don't see how it's avoidable. Usually though it's not until well after publication that someone (usually my wife) will ask, "Hey, is this so-and-so?" And usually, it is.

Go on to the next project. Another writer said that there is no such thing as writer's block, only project block. His point was that to be a working author, you don't have the luxury of being stumped. This is a business, it's a job. If I get stuck, then I switch to a different story - usually in an entirely different genre or at least voice -- and let the blocked story work itself out in the background. Sometimes it does, sometimes it doesn't. But I've got anywhere from five to up to 20 different ideas I can jump into at any given time. Having said all that...sometimes writing in a new space helps, or just going for a walk. For me, being able to wander around the house and talk out loud is huge. I solve a lot of problems by talking them out. The dog thinks I'm a lunatic, but, whatever....

Maybe "The Great Brain" series by John D. Fitzgerald. He has such a great Twain-like treatment of life in the late 1800s southwest, and I have read those books until they fell apart. After that, maybe a Star Trek novel, but only if I could stay on Earth. I'm not going up in one of those ships or getting beamed anywhere! But I like the image of Earth that Roddenberry envisioned.

Wow, that's tough! I thought the adaptation of Patrick Suskind's PERFUME was good, considering the whole novel is based on the sense of smell. Of course, THE NEVERENDING STORY is still a classic, although the movie only covers the first third of the novel or so.

John D. Fitzgerald (deceased) who wrote that Great Brain series would be great. Stephen King, of course. Does Joss Whedon count? Eh, probably not, okay, skip Whedon. Shakespeare would be something of a hoot, I bet! One of the very best parts about being an author is the opportunities to meet and hang out with other authors, so many of whom were heroes to me before I got published. I had dinner with Judy Blume once, for example (although we only met briefly). I think I've met just about all my pre-publication heroes thanks to being able to attend conferences and other events with authors. They are rock stars!

Tom, thanks for joining us again to share more about your inspirations as an author. How exciting that you have gotten to meet so many of your heroes!

Joining LitPick today for a Six Minutes with an Author interview is Tom Leveen! Tom is the author of several books including, Sick, Party, and Zero. In addition to being an author, Tom is a fan of John Williams music and the Phoenix Symphony!

Tom has more than twenty years of live theater experience as an actor and director and is happy to come talk to your school, library or classroom.

In second grade, we had an assignment to write a short story. I did, and then my teacher told me to make it longer and go read it to the first grade class. I thought I was in trouble for something, because clearly, this was a punishment. Then when I started reading and saw all the first graders so quiet and looking at me and waiting to see what would happen next, I knew I wanted to tell stories, and I knew I wanted to be in front of people. I've been doing some variation on those two things ever since - from running theatre companies to writing novels.

My earliest influences include The Great Brain series by John D. Fitzgerald (which I still read once a year or so); Judy Blume (who I finally got to meet a couple years ago, and she is just as awesome as you'd think!), and Stephen King. Yep, Stephen King, who I started reading in fifth grade without anyone apparently thinking maybe that was a bad idea at my age. I began writing short horror or supernatural stories around that time, many of which I've kept, that were inspired by his stories in collections like Skeleton Crew.

I was also influenced by several teachers. One of them, despite what a pain I was in his classroom, gave me an A on a story assignment once. I always felt he didn't have to do that, but he did. Another encouraged me to write a novella that I took to a young authors’ conference at Arizona State University...where I now teach a novel writing class. :) And I had two wonderful speech and drama teachers in high school who encouraged me time and time again, to whom I owe everything, and who still come out to my book launches all these years later. A good teacher changes lives. That's a fact.

I do tend to set my novels in Arizona, because it is familiar and it's not used often in YA fiction, particularly. A lot of people even today still think we all ride horses to work or something, but Phoenix is the fifth- or sixth-biggest city in the nation! I live in the Sonora desert, having spent my entire life here, and I like showing off the state to readers who haven't been here. (We do have snow, for example - just not in Phoenix!)

I enjoy writing characters that are off beat in some way -- or who *think* they are. It depends on the topic of the book. For my upcoming novel, HELLWORLD (January 2017), I specifically needed as "average" or "normal" a main character as possible, to balance the supernatural elements that she faces. I did the same thing in SICK. When I have an average Joe/Jane protagonist though, you can bet I'll surround them with supporting characters who have bold, brash personalities. They're more fun to write!

There are no shortcuts to being a good author, but here are some things to consider:

One, support your local bookstore. Get on their mailing lists and go to as many author events as you can (which are almost always free). Listen and ask questions. These are people, like me, who are on the front lines of the industry and who can save you hours of heartache, just knowing what lies ahead.

Two, understand and accept that the very moment you decided you want someone to pay you for writing fiction....*you have just started a small business.* Never forget that!  If you really want some reader to pay you for what you wrote, then you need to start thinking of yourself as an entrepreneur. That includes understanding taxes or hiring someone who does. It includes learning about marketing, which you will do a lot of. It means being ready to speak to large groups, because that will be part of how you market and may be something that you do to supplement your income.

Of course, you needn't worry about those things before your first sale, but you should definitely start thinking about them before then!

Third, and this is important: Anyone can be an author. There is no secret handshake. But you do have to be able to take advice and honest critiques and know how to put those critiques to work.

These days, I have a coffee shop that I like to work in during the morning. Before my son was born, I worked at home late at night. That doesn't happen anymore. :)

ZERO was originally written during my first year in college. It wasn't published until 19 years later -- the story is older than Zero herself in the novel. :)

Tom, thank you for joining LitPick for Six Minutes! Setting your books in Arizona is a great way to introduce people to your beautiful state! 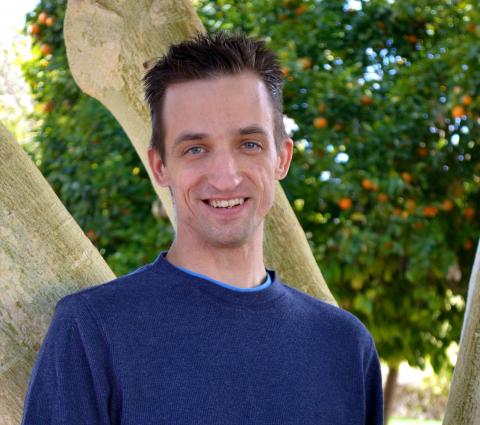