Author Todd Mitchell joins LitPick for Six Minutes with an Author! Todd is the author of Backwards, The Secret to Lying,  A Flight of Angels, and The Traitor King.

Love letters. I had a very bookish girlfriend in high school who wrote the most amazing letters and poems. She taught me more about writing than anyone, because I had to learn to woo her with words. My poetry was never very good, though, so I learned to write her stories. Now, I often think about writing fiction as writing a love letter to someone I might not ever meet.

I'm guessing you're interested in writers here, and not the friends who convinced me to steal golf carts or dye my hair green. Writing-wise, I think I was strongly influenced by the short stories of David Foster Wallace in Girl With Curious Hair. It was his first collection, published when he was only 27, and it mixes pop culture fascination with existential self-examination and raw emotion in a way I'd never seen done before or since. He's the writer who convinced me to go for it, and to take big risks in my writing.

As far as favorite books go, it's always the one I'm working on. I'm not just saying that. I think, in order to go through all the agony of writing, you need to fall in love with a story and a character. If you don't, then the book won't get written. So the book I'm writing is always the book I'm most obsessed with. Right now, it's a book called Species about a father and daughter living in a post-climate-disaster swamp who trap one of the last living panthers, and have very different ideas of what to do with it.

As far as favorite characters go, I have many. Cat in Backwards and Ellie in The Secret to Lying are two that come to mind immediately. I also like Dickie and Cheese and Heinous from The Secret to Lying, and TR from Backwards. And there's one character named Omaha in a book I wrote years ago that I never tried to publish (because the story never came together right), but Omaha is definitely one of my favorites. I need to find a way to get her out of that book so people can meet her.

Or were you asking about favorite characters in other people's books? If so, I like Scout, from To Kill a Mockingbird. That's also one of my favorite books. Long live Scout!!!

The best piece of writing advice I got was to "write the book you most want to read." If you let that be your guiding star, you can't go too wrong, because at least you'll satisfy yourself with your writing. But chances are, if you write a story that you enjoy, others will enjoy it too. We're rarely as different from each other as we think.

Also, work with a writing group. Writers need readers who can give them good critical feedback. A story might start in your head, but it's not real until it exists in someone else's head. So in order to enact your visions, you need to know what other people are getting or not getting in the scenes you write.

I suppose my favorite place to write would be on a cliff overlooking the ocean in Donegal, Ireland. But I don't usually get much writing done there. Instead, I usually write at a desk in my basement. It's a nice basement, though. I have a window that looks out onto a park. Sometimes a snake slithers up the screen to check out what I'm doing (no joke --this happened yesterday. I took a picture).

If you'd like more advice on writing and publishing (like the most important thing to know about your characters, and my top six pieces of writing advice, and how to get a book published in ten "easy" steps, and how to find a writing group, and why squirrels are awesome, and what post apocalyptic books say about us, etc…) please check out my website: www.ToddMitchellBooks.com. And if you want to bring me out to your school for an Author Visit or a Skype Visit, I do both. Please tell your teacher or librarian to check out my site for details.

Be excellent and enjoy the adventure!

Thank you for spending six minutes with LitPick, Todd! Now, about that snake…. 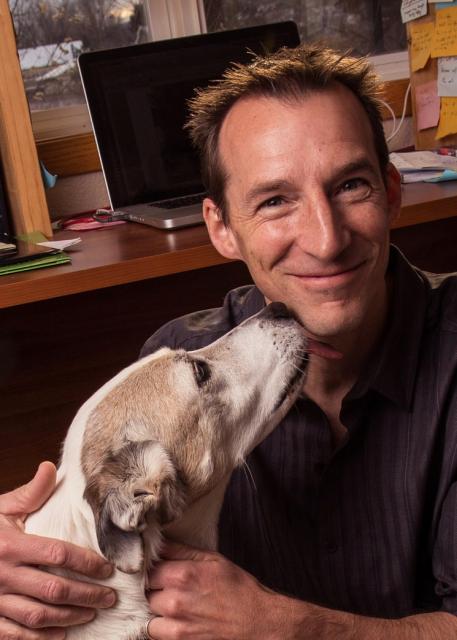