Stan Yan is best known for his comic art and zombie caricature work, with credits which include an extended run on the geek-culture inspired, SubCulture (Ape Entertainment, Action Lab, written by Kevin Freeman, writer for Shrek, Richie Rich), his self-published slice-of-life series, The Wang, and spot illustration work for The Westword.  As a self-proclaimed “idea man,” Stan’s passion extends to the authorship of his rhyming picture book, There’s a Zombie in the Basement, Storm Comics’ Vincent Price Presents: Zombicatures and his long-running, post-apocalyptic webcomic series, REVVVelations (Illustrated by Lego Ninjago artist, Jolyon Yates).  Stan is currently working on a graphic novel, Regret: A Cancer Survivor’s Story.

Stan Yan joins LitPick for Six Minutes with an Author. Stan is a writer/illustrator whose educational background is in accounting. He is a self-taught artist who now teaches summer camps, after school programs, and workshops.

As far back as I can remember, even before I could write, I've always drawn sequences of images into stories. Visual storytelling has always been my muse and what I would do, even when I wasn't doing it for a living.

In kid lit, my influences are fairly standard: Dr. Seuss and Maurice Sendak. I know for a fact they were my two main influences in the creation of There's a Zombie in the Basement.

Where the Wild Things Are is probably my favorite picture book visually. My writing sensibilities are highly influenced by anything Seuss, so it's not a surprise that books like Green Eggs and Ham were among my favorites.

As far as my work is concerned, I've been immersed in the world of zombies for 11 years: I've become known as "the zombie caricature guy," drawing people as zombies at comic book conventions and other events, so it's not a big surprise that zombies are a pretty common subject for my stories, although in most cases, I see zombies as more of a setting than subject. The basis for most of my work is real life, which is where I draw most of my inspiration.

My advice is not unique: Write what you know. However, you needn't be literal about this. You can still write fantasy or science fiction, but when reflecting on your character's feelings, actions and motivations, use your own experiences, interactions and feelings as a guide, and it will make your characters feel more genuine.

While my latest book, There's a Zombie in the Basement, is full of fantastical creatures, the inspiration for the book was my son's fear of my zombie artwork. One day he refused to come down to the basement. When his mom asked why, he replied, "I'm scared." When she asked what he was scared of, he pointed at all of my zombie artwork hanging from my basement studio walls.

I write on my laptop in my basement studio, but I get most of my best ideas in the shower, while on walks, or in stop-and-go traffic... places where my idle mind can go wild. Apologies to anyone I might rear end.

My son is no longer afraid of my zombie artwork. I like to think it's because of my book. In fact, he's written and illustrated 3 of his own zombie books by the age of 6, selling them at my booth at some local conventions.

The last page of my book is a page that asks kids to draw what scares them. The idea is to remove some of the mystery of what might make kids afraid. I think that's what has helped my son, and I hope this also helps other kids too.

Thanks for joining LitPick for an interview, Stan. We enjoyed your touching story about writing There's a Zombie in the Basement to help your son’s fear. 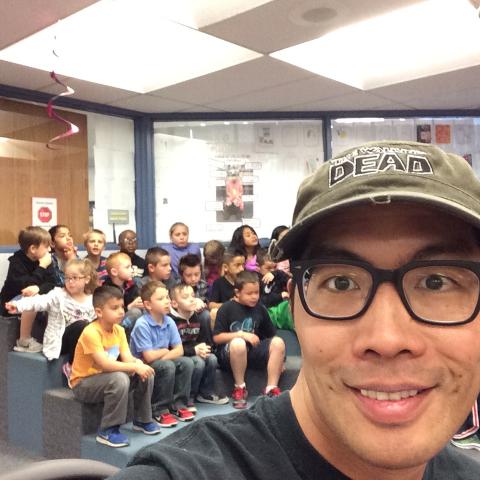