Born in Philadelphia to two slightly eccentric, amazing visual artists, Sophie has been developing her skills in craft construction and children’s entertainment for years.

Sophie earned a BFA in acting at the University of the Arts in Philadelphia. After graduation she spent 5 years in New York City working Off-Broadway as a company member of the groundbreaking Ridiculous Theatrical Company.  While in NY she also made multiple appearances in film and on television.

In 1992, along with her husband, she relocated to San Francisco. It was here that Sophie stumbled into her present business. While working as an actor in the Bay Area she took a day job as a nanny. As part of her job she was expected to help plan her client’s birthday parties. After a few of these events, Sophie and all those around her discovered that she had an extraordinary talent for creating special events for children. Sophie began creating these events for not only the children she was caring for, but their friends as well.  Sophie’s Stress Free Soirees was born.

Sophie’s Stress Free Soirees, now in its 20th year, is a full-scale children’s event planning service. Sophie and her staff plan and execute approximately 250 events per year, ranging from basic entertainment for 2 year olds to large-scale private and corporate events.  The impact that Sophie’s Stress Free Soirees has had on Northern California children and families remains unmatched by any other children service.  Her client list includes everyone from celebrities to prominent social and business leaders as well as multinational corporations.

A desire to branch out and touch the lives of children and families outside of the Bay Area led to the concept for Sophie’s World.  Designed as a free online resource for children and their caretakers, the suite of sites includes crafts, games and activities created and developed with the children with whom Sophie collaborates.  Sophie’s World has grown from the a single site to now incorporate a YouTube Channel, Facebook page, PInterest boards and now her first book.

I "officially" began writing songs when I was 10 years old and my parents bought me my first guitar.  I have been making up stories and cartoon strips since I could hold a pencil.  There were frequently reasons for me to write: we needed a play for our English class, so I wrote it; my sister was having a birthday party, so I wrote a puppet show; there would be an anniversary, so I would write a song; for a church picnic I'd write a goofy poem.  It just always seemed that there was something that needed to be written, and so I'd write it.  99% of the time I would also perform it.  My writing has almost always been linked to some sort of performance.

My (maternal) Grammy and Pop Yocom were probably the biggest influences in my life, besides my mom.  My Grammy was a teacher who had me sitting at the kitchen table carving soap by the time I was 3.  She'd sit with me for hours reading "Cricket Magazine" and storybooks.  My Pop was a real storyteller.  He could weave a story out of two fuzz balls and wayward broom.  He was also a punster, which gave me a love for words and double meanings.  He would sing me little songs all day long which is why, to this day, I love making up rhymes.  It was my mom who supported me through every endeavor I've ever taken.  She's been my rock.  She kept me grounded, kept me reaching, and never let me give up. She's always believed in me...and that means a lot.  It gives one a confidence.

I love books.  And I still love the spoken word.  Most of the time I will not only read a book, but listen to the audio version.  I admit to being a huge Harry Potter fan. I find myself listening to the entire canon at least 2 times a year. Now that JK Rowling has stopped the series, I've begun following her adult literature, especially the one written under the pseudonym Robert Galbraith...I've become a big fan of her new heroes Cormoran Strike and Robin Ellacott

I think one of the most important things is to observe the world around you.  Keep a journal by your side.  Write down what you see, what you feel, what catches your eye.  The world around us has so much to offer in the way of creative fodder, but you've got to pay attention or you'll miss it! And don't think, "Oh, I'll remember this moment"...trust me...write it down! My biggest advice would be this: when inspiration hits, don't delay, jump on it, write!

At my kitchen table, on my laptop. However, I have been known to write short stories on airplanes (remember what I said about when inspiration hits....)

Don't be afraid to get messy!  This world of ours seems to crave perfection.  I think that a lot of good, possibly great, art is destroyed because it's "not good enough".  If you want to write, write...if you want to sing, sing...if you want to dance around in a circle, well then do so.  You only discover who you are and what you have to offer when you are true to yourself.  Stop worrying about what other people deem good or bad.  Go ahead, get your hands dirty.  Nothing will happen if you sit "dreaming" about what could be.  You gotta make it happen! Trust me, no one is going to present you with a gift wrapped life. 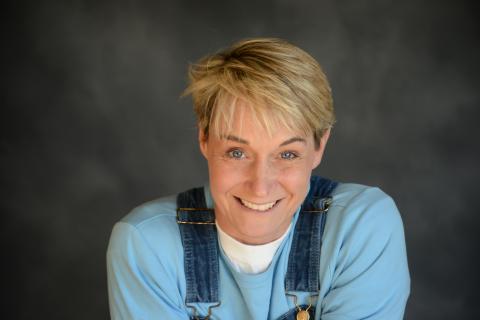