Lorri Horn is an educator and an author. She has a degree in English, a teaching credential, has been Nationally Board Certified, and has taught public school for over 14 years. She loves cheese (and wants it to be its own food group, which made working on a vegan book a challenge), humor, baking, books, and spending time with her family. Lorri’s background as a career schoolteacher and instructional leader make her especially sympathetic to the needs and perspectives of children, and this sensitivity features in her work as an author. Lorri blogs on her website, lorrihorn.com. Her work has appeared in The Los Angeles Times, The Huffington Post, Phi Delta Kappan, The College Board and Mayim’s Vegan Table. Lorri lives in California with her husband, son, and their dog, Wolfie.

LitPick is partnering with The Children’s Book Review and Amberjack Publishing to bring you an interview with Lorri Horn, author of Dewey Fairchild, Parent Problem Solver. Be sure to check out the giveaway at the end of the interview.

***Where did your inspiration come from to write Dewey Fairchild, Parent Problem Solver?

I traditionally write non-fiction essays about issues on my mind. When I taught high school, for example, I wrote about teaching during times of economic scarcity for classrooms. When I stayed home with my son, I wrote about his first year of preschool and my trauma of when the other kids didn’t let him join in on their dinosaur game. Often, in these pieces, I’d relate with humor some sort of problems going on in otherwise good situations and rant about how they needed fixing. Dewey is a fix-it kind of guy. So, I can see why he’d emerge, but truthfully, I have no idea how it happened. I usually plan my ideas out methodically. In this case, one day, the idea for the book just came to me, and then more ideas developed each day, many times surprising me what came next as much as it will the reader. Dewey is a fixer, not just a suggester—which, evidently, I find much more satisfying.

***How has your experience as an educator helped you as an author?

The first is the humor and silliness I brought to the book. Students being authentically engaged with whatever material they have before them has always been essential to me as an educator. A gateway into engagement with students is often through humor, and I’ve always loved sharing that with kids. I also possess a love for wordplay and language and introducing children to just how closely they can help their reader smell a particular donut if they carefully compare it to other words their reader knows. While writing Dewey, I chose words carefully, both to make children laugh, but also to help them see, smell, taste, and imagine the words they read, both to bring them to life in this world of ours that competes for children’s attention with quick-moving images, but also to provide a model for them in their own writing as well.

Growing up, my only cousins lived on the east coast and we lived on the west coast. Our mothers who were sisters wanted to make sure we got to be together, and we’d spend summers together at our grandparents’ home in Massachusetts. One of my favorite memories is how we’d all be sleeping on her living room floor and play tic-tac-toe on the fabric of her robin’s egg blue velvet couch. We’d do it for what felt like hours until she’d come down and stop us for fear we would ruin her good couch.

The world of Marion Zimmer Bradley’s Mists of Avalon.

My favorite thing to do was to read what writers have to say about writing. Anne Lamott, Stephen King, Richard Ford, Isabel Allende, on and on. You’ll see you aren’t alone, that it’s not magic, and that you can do it, too.

Lori, thanks for joining us and sharing how your life experiences have inspired your writing. We love the advice you give for those wanting to become authors.

· Open to residents of the fifty United States and the District of Columbia who are 13 and older.

· Winners will be selected at random on or about September 3, 2017.

· Odds of winning depend on number of eligible entries received. Void where prohibited or restricted by law.

Publisher’s Synopsis: Dewey Fairchild isn’t just good with parents, he’s great with them. He’s so good at handling parents that he’s built a thriving business out of it. He even has a secretary, Clara―a great alibi and an even better baker. Dewey settles the most troublesome of cases, from an overprotective mom who won’t let her child go to class on her own, to a dad who can’t stop picking his nose any chance he gets!

Dewey has no problem handling other people’s parents, but when he overhears his parents talking one day, he faces a challenge he never expected. Dewey can solve any problem parents may cause, but what will he do when the parents who are causing problems are his own? 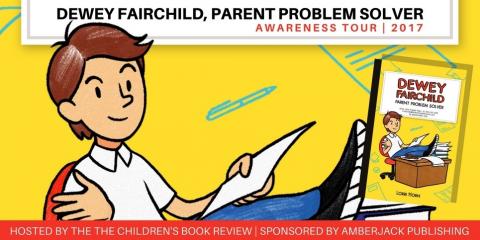