He was born in Manhattan, New York. His first job at age eighteen was at Walt Disney Studios. He has since led a career as an advertising artist, fine artist, cartoonist, designer, animation in-betweener, illustrator, and as an artist-in residence at Doubleday. His series of 26 Draw 50... books take a friendly and minimalist approach to teaching drawing while the books often contain no instructional text.

He enlisted in the military and served as a second lieutenant during World War II.

He and his wife Jocelyn resided in Mission Viejo, California.
**Bio from Wikipedia, the free encyclopedia. 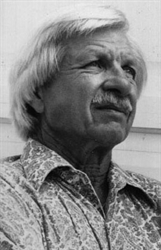