I'm a YA author and SCBWI PAL member with 5 books published. I was formerly the senior editor for Champagne Books and now do freelance editing. I've lived all my life in southern Alabama, I'm the mother of three gifted children and a blind Pomeranian named Tilly, and I'm married to the love of my life—a superhero who disguises himself during the day as a high school teacher and coach.

SIX MINUTES WITH AN JOYCE SCARBROUGH:

Joining LitPick today for a Six Minutes with an Author interview is Joyce Scarbrough. Joyce is a Southern woman weary of seeing herself and her peers portrayed in books and movies as either post-antebellum debutantes or barefoot hillbillies á la Daisy Duke, so all her heroines are smart women who refuse to be anyone but themselves.

Joyce was formerly the senior editor for Champagne Books and now does freelance editing. She has five published novels as well as several short stories available as free Kindle downloads. She writes both adult and YA fiction and is active in her regional chapter of SCBWI as well as her local writers’ group. Joyce has lived all her life in beautiful LA (lower Alabama), she’s the mother of three gifted children and a blind Pomeranian named Tilly, and she’s been married for 33 years to the love of her life—a Superhero who disguises himself during the day as a high school math teacher and coach.

I wrote poems and stories in high school and took a course on writing for children after I graduated, but once my own children were born, my writing took a back seat to raising my family. Then, at my 20th high school reunion, one of my best friends asked if I was still writing, and it really hurt me to tell him I hadn't written anything in a long time. I was turning 39 that year and figured I had only one more good year before I became too old and decrepit to do anything, so I started writing on my birthday and finished my first novel six months later. I've now written five books and was thrilled to find out that life after 40 isn't as bad as I'd thought.

My love for a good story began even before I could read. My daddy (yes, Southern women call their fathers "Daddy" all their lives!) used to tell me stories at night before I went to sleep, sometimes stretching them out over several nights. I think that's where I got my feel for storytelling, pacing, and suspense. My favorite authors are Tabitha and Stephen King, John Grisham, Barbara Kingsolver, Rick Bragg, Suzanne Collins, and J.K. Rowling.

My favorite book of all time is Little Women by Louisa May Alcott. I read it the first time when I was in the fourth grade and have (so far) read it eight more times. I wanted to be one of the March sisters, and Jo March was my hero because she wanted to be a writer too. When I write my own books now, my goal is to create characters that readers will never forget and books they'll want to read more than once.

The most important thing for a writer to do is READ. I'm always amazed when I hear writers say they were never much of a reader or that they used to be but don't have time anymore. I am always reading at least one book and read every single day. Other than reading, my advice for aspiring writers is to get the first draft down without worrying about how good it is. The key to good writing is rewriting, but you have to get that first draft finished before you can start revising.

Sitting at my writing desk facing the window when it's raining. Fortunately, I live in Mobile, Alabama, which has the highest annual rainfall in the country, but on sunny days I'm inspired by the wild birds and hummingbirds at the two feeders in my front yard.

My secret identity is the Masked Grammarian—faster than a run-on sentence, more powerful than italics plus an exclamation point, able to spot a passive verb at a thousand yards! Disguised as a mild-mannered wife and mother by day, our heroine seeks out careless writing under the cover of darkness and wages a one-woman war against wordiness, double negatives, and the dreaded dangling participle. With her atomic heat vision—powered by mega doses of caffeine and a pair of fashionable reading glasses—she reunites split infinitives by the dozens. With a superhuman vocabulary too vast for mere mortals to comprehend, she zaps clichés and redundancies into oblivion. No one knows for certain how she came to be the Purveyor of Powerful Prose. Could she be from the planet Nerdulus, or is the color blue the secret to her linguistic powers? Is that why she loves the color so much? I guess you'll have to read her books to find out!

~Joyce Scarbrough
"Stay true to yourself and your dreams will come true.”

Joyce, thank you for a wonderful interview! We’re sure you’ve inspired many people to pursue their passions, no matter their age. 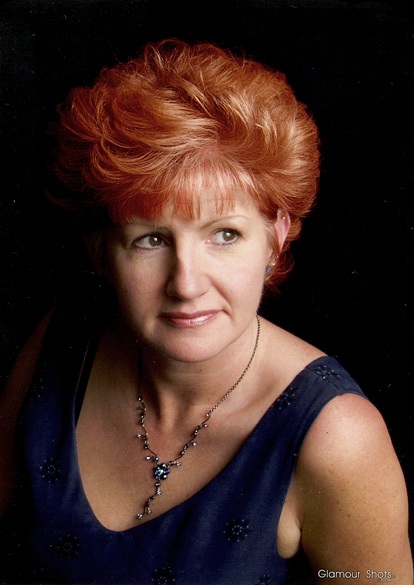