Article by Mr. Maberry on writing the Vampire Wars

Busy author Jonathan Maberry is joining LitPick for Six Minutes with an Author. Jonathan is an award-winning writer of fiction and non-fiction covering mystery, horror, vampires, and graphic novels. He was an expert on the History Channel documentary “ZOMBIES: A Living History” and is the co-creator of an entertainment news show currently in development. The list of places where he has been a keynote speaker, guest of honor and workshop leader is extensive. At the end of this interview, there is a link for signing up to Jonathan’s newsletter.

I’ve always wanted to be a writer…even before I knew what that was. Before I could even read and write I was telling stories with toys. I used to make up plays for my friends and I to put on for our folks. I wrote for the school paper, and I joined writing clubs. There’s nothing else I’ve ever really wanted to do, though there are plenty of things I had to do in order to earn a living. Writing has been my full-time job for ten years, but for the twenty-five years before that I wrote part-time and worked a bunch of different day jobs. I was a bodyguard, a martial arts instructor, a college teacher (at Temple University in Philadelphia), a graphic artist, and a medical information specialist on call-in lines. Those jobs paid the bills. In 2004 I finished my first novel, GHOST ROAD BLUES. It sold the following year and was published in June 2006. That allowed me to become a full-time writer. I’m now writing my 25th novel.

Before I became a novelist, when I was writing part-time, I wrote over 1200 magazine feature articles, 28 nonfiction books (including college textbooks, martial arts books, and a series of books about the folklore of monster beliefs). I also wrote greeting cards, poetry, song lyrics, and two plays.

Making the switch from part-time to full-time writer was difficult, and it was also happening during a time where I was changing what I wrote. I switched from nonfiction writing to fiction, and that’s always a risk. It’s very hard to break into fiction and even harder to make a living at it. I found a very good agent (Sara Crowe of the Harvey Klinger Agency) and together we pitched my books and launched a new phase of my career. There were some really scary times when I didn’t have much money. I even had to borrow money to drive from Pennsylvania to Toronto to receive my first Bram Stoker Award –for GHOST ROAD BLUES. Now a lot has changed. I make a good living and have moved to southern California with my wife, son and our little dog, Rosie.

When I was a teenager I was fortunate enough to meet and get to know two great and influential writers –Ray Bradbury and Richard Matheson. Apart from the advice on craft they gave me, both authors gave me solid advice on how to become a successful published author. They said that although writing is an art–it’s the intimate conversation between author and reader—publishing is the business of selling copies of art. Publishers have no obligation to buy anything that they don’t feel will sell well. It is in the best interest of a writer who wants commercial as well as artistic success to learn both the craft and the business sides, and to know them well.

A codicil to that is that success can best be achieved by not being a jerk. Words to that effect. Respect, etiquette, fair play, generosity of spirit, a willingness to network and share knowledge, tolerance, and an attitude of positivity are all qualities of successful professional writers. That’s the advice I got from Matheson and Bradbury. I’ve done my best to live by those tenets and, yes, I do believe that this has contributed to my success.

And one other quality helps…flexibility. Matheson also advised to be more than a ‘one trick pony’. He said that a writer who wants to make a career out of a business as capricious as publishing should be able to try new things, stretch creatively and adapt to the changing world.

I’m a fickle creator in that I’m always in love with the book I’m writing. That said, there are characters I return to with a lot of joy and excitement. I’m doing research for my 8th Joe Ledger weird-science action thriller, and Joe is a good friend now. He’s funny, reliable, strange, more than a little crazy, unpredictable (even to me!), and we share the same ideals and ethics. But I keep returning to Pine Deep, the troubled little town from GHOST ROAD BLUES, to the seedy private investigations office of werewolf Sam Hunter, and to the post-apocalyptic zombie-infested wasteland of the ROT & RUIN. I know those places so well and am positive that I have many more stories to tell.

There are several important things to know about becoming successful as a writer. Things I wish I’d know earlier in my career.

First –be very good at what you do. Having a natural gift for storytelling is great, but you need to learn the elements of craft. That includes figurative and descriptive language, pace, voice, tense, plot and structure, good dialogue, and many other skills. Good writers are always learning, always improving.

Second –learn the difference between ‘writing’ and ‘publishing.’ Writing is an art, it’s a conversation between the writer and the reader. Publishing is a business whose sole concern is to sell copies of art. Publishing looks for those books that are likely to sell well. There is absolutely no obligation for anyone in publishing to buy and publish a book totally on the basis of it being well written. It has to be something they can sell. A smart writer learns how to take their best writing and find the best way to present it to the publishing world, and then to support it via social media once it’s out.

Third –you are more important than what you write. A writer is a ‘brand.’ That brand will, ideally, generate many works –books, short stories, etc. Each work should be written with as much passion, skill, love, and intelligence as possible, but when it’s done, the writer moves on to the next project. And the next.

Fourth –finish everything you start. Most writers fail because they don’t finish things. Be different.

Fifth –don’t try to be perfect. First drafts, in particular, are often terrible. Clunky, badly-written, awkward, filled with plot holes and wooden dialogue. Who cares? All a first draft needs to have in order to be perfect is completeness. It is revision that makes it better, and makes it good enough to sell. So, don’t beat up on yourself if your early drafts are bad. Everyone’s early drafts are bad. Everyone.

I’m a caffeine nomad, so I usually start my writing day at a Starbucks, diner or other coffee shop. I do about half my day’s writing there, then go to the gym. In the afternoons I usually return to my home office, which has a splendid view of the Pacific Ocean, and there I do a second four-hour stint. But, really, I can write anywhere. On airplanes, in hotels, and –using a voice recorder—while walking or driving. I’m not fussy and I don’t need to wait for the Muse to touch me.

JONATHAN MABERRY: I’m in the middle of one of the busiest years of my career and I’m juggling dozens of projects, large and small. I’ve written three novels so far this year and will be finishing a fourth while in Italy. I wrote the 8th Joe Ledger novel, KILL SWITCH, which will debut in April, and I’m touring for the 7th, PREDATOR ONE. I had my first middle-grade book (for 9-12 year olds) published this year, THE ORPHAN ARMY (first volume of THE NIGHTSIDERS series), and wrote the sequel, VAULT OF SHADOWS. I had a Steampunk novel debut recently, GHOSTWALKERS, which is based on the popular role-playing game, “Deadlands." I edited an anthology of all-new X-FILES short stories that was published and immediately sold out its first printing; and the third volume of my V-WARS vampire series debuts next month. I had two graphic novels released this year, ROT & RUIN: WARRIOR SMART and V-WARS: ALL OF US MONSTERS; and in December I’ll have a tabletop game version of V-WARS released. I’m currently editing several other anthologies, researching my next five novels, and writing a bunch of short stories. And I have several projects in development for film or TV, including ROT & RUIN, EXTINCTION MACHINE and V-WARS. And I recently sold three collections of my short fiction to be released in print and audio.

Wow! Thank you so much for making time to visit LitPick, Jonathan! You are incredibly busy! Congratulations on your successful career!

V-WARS: IDW -anthology and comics; now in development for TV 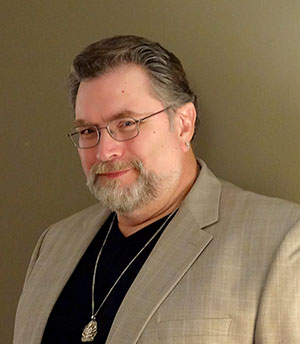