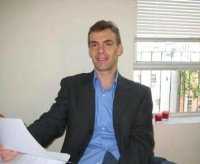 From Amazon.com:
John Michael Cummings' short stories have appeared in more than seventy-five literary journals, including North American Review, The Chattahoochee Review, The Kenyon Review, and The Iowa Review. Twice he has been nominated for The Pushcart Prize. His short story "The Scratchboard Project" received an honorable mention in The Best American Short Stories 2007.

His short story collection, Ugly To Start With, will be published in October of 2011 by West Virginia University Press.

A native of Harpers Ferry, West Virginia, Mr. Cummings has worked as a reporter, editor, teacher, and tutor, most recently at Seminole State College and Lake-Sumter Community College in central Florida.