Janet Edwards grew up in prosaic England but also shared the lives of amazing people in fantastic worlds. Her guides were books written by authors, some still famous and some already forgotten. Those authors have hundreds of individual names, but they have one title in common. They were all Expert Dreamers. After growing bored with work involving tedious technical facts, Janet made a break for freedom through a magical wardrobe and is now training as an Apprentice Dreamer. She has a husband, a son, a lot of books, and an aversion to housework. Visit her online at www.janetedwards.com, www.facebook.com/JanetEdwardsSF, and on Twitter @JanetEdwardsSF.

I’m a discovery writer. I start off with a situation, and usually I’ve got a glimmer of an ending as well, but other than that I’m heading off into the darkness. That can be terrifying, but it’s also the biggest joy of writing for me. I’m discovering my characters as I go along, I’m learning about their hopes and their fears, and I want to find out what happens to them.

If I have too much of an outline before I start writing, then I find it actively works against me. I can point at places in my Earth Girl books where the characters’ decisions and events took me totally by surprise. I find that really exciting. If I had everything worked out in advance, I’d lose all my incentive to write the story.

Of course some writers will say exactly the opposite thing to this. They’d get nowhere if they didn’t plot every detail in advance. Every writer is different, so everyone has to work out what method works best for them.

I can’t write about real people. I think it’s the same problem as outlining. Basing a character on a person I knew would be very restricting. The closest I’ve come to it is in the case of a prequel novella in the Earth Girl series, called Earth and Fire. After I’d written it, I renamed a couple of the characters after two very special readers, just to honour the awesome way they’d achieved things against the odds.

There are inevitably moments when my own experiences influence my writing. The Earth Girl trilogy is the story of a girl who lives in a future where people use interstellar portals to travel between hundreds of worlds, but she’s imprisoned on Earth. I wrote it after a long period where a disabling illness kept me imprisoned at home. There are a lot of links between what happens to Jarra and what has happened to me, but those links are limited to our experiences. Jarra is a very different person to me.

If I get writer’s block in the middle of writing something, if my characters stop telling me their story, then I’ve discovered it means I’ve gone wrong. In that case, I need to go back and look at the last couple of chapters. The problem is usually that I’ve made characters do something unnatural in an attempt to make the plot go in the direction I want. I’ve forced them to make a decision they wouldn’t make, or do something they wouldn’t do, and not unnaturally they’re sulking about it.

The other sort of writer’s block is the type you get at the start of a new project. Some people have the problem of having no idea what to write. I suffer from idea overload, so I usually have the opposite version where I have at least six different things I want to write. I can’t write them all at once, so I have to make myself pick just one.

The problem with this is that a lot of really thrilling book worlds would be hideously uncomfortable to live in. The rational side of me starts thinking about things like the desirability of indoor plumbing. My decision is likely to vary from day to day anyway. At this particular moment, I’m torn between Harry Potter’s world because of the magic, and my own Earth Girl future because of traveling between worlds by interstellar portal.

I hate book-to-movie adaptations where they made radical changes. I can accept cutting minor plot events to keep the movie to a sensible length, but I want a movie to stick with the spirit of the books and be true to the original plot and characters. Both the Harry Potter and the Lord of the Rings movies did that well for me.

Now that’s a really difficult question, and again the answer would vary according to my mood. Today my answer is Terry Pratchett, because I love the books set on his Discworld.

Wild Card question: On your website you refer to work with tedious technical facts. What sort of work did you do before becoming a successful author?

I used to work with computers. Even at the places where I had to sign incredibly strict secrecy agreements (according to one of them, I wasn’t even allowed to dream about my work, let alone talk about it!), this usually ended up being tedious. Most of the time I was working freelance. The best bit was always walking into a strange place, where I had to fit into a different role, learn all about their business and systems, and be solving problems inside a week.

I did learn a couple of useful things back then. Badly placed punctuation can do a surprising amount of damage, and you should always check where the guard dogs are.

Janet, thank you for visiting LitPick for an Extra Credit interview! We enjoyed learning more about you.

Janet Edwards lives in England. As a child, she read everything she could get her hands on, including a huge amount of science fiction and fantasy. She studied Maths at Oxford, and went on to suffer years of writing unbearably complicated technical documents before deciding to write something that was fun for a change. She has a husband, a son, a lot of books, and an aversion to housework.

I’d always loved reading books. I actually started writing them myself when I was recovering from a bad illness. I joined a two hours a week class in creative writing, and the teacher encouraged me to enter my first short story in a competition. I was stunned when it came second and ended up being broadcast on a local BBC radio station.

That early success encouraged me to keep writing more short stories and then full length novels. One day I started writing about a girl who lived in a future where everyone could casually portal between hundreds of colony worlds, everyone except the despised one in a thousand born with an immune system that could only survive on Earth.  After my experience of being unable to leave the house because of my illness, I was writing about a girl who couldn’t leave this planet. Three years after joining the writing class, I was offered a publication deal for the Earth Girl books.

I’ve read thousands of books by hundreds of authors. I can’t point at a specific one that influenced me to write Earth Girl, or that I feel really resembles it. I think all those books got mixed together in my subconscious, like some sort of literary cake mixture, and inspired my writing. So the answer really is that I was influenced by every author I’ve ever read.

I love a lot of very different books, so it’s hard to choose just one. Dragonflight by Anne McCaffrey was a very special book for me. Partly because of when I read it. There were some bad things happening in real life, so I needed to escape into worlds of my imagination, and Dragonflight took me riding on dragons.

If you want to be an author, you have to spend a huge amount of time writing, rewriting, and rewriting yet again to improve your work. It takes a lot of practice to get good at anything.

I know this will sound terrible, but I do a lot of my writing in bed. That habit began when I was recovering from my illness and needed to spend a lot of time lying down. These days it’s more because my subconscious works on my writing while I’m asleep, thinking up new ideas, and when I wake up I need to start writing them as fast as possible. Sometimes my subconscious is so excited about one of its bright ideas that it wakes me up in the middle of the night to make me write it down!

My main reason for writing is because I’ve had so much enjoyment from books myself over the years, and would like to pass that on to others. That’s why it’s always wonderful to hear from people who’ve enjoyed reading my books. 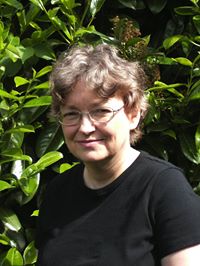