James Austin McCormick is a college lecturer from England who enjoys all types of speculative fiction; science fiction, horror and fantasy especially and often tries to blend these elements together in his own writing. He is also a particular fan of classic Gothic and Victorian horror tales and is currently in the process of writing updated version of these with a science fiction spin.

James is the author of a horror novella “Sundown,” published in Deathgrip 3: It Came from the Cinema (Hellbound Publishing 2005) as well as several shorter works in publications such as Tales of the Talisman, Jupiter SF, Thirteen Stories, Trunk Stories and Ethereal Tales. Science Fiction Continuum also published a series of his tales from 2004 until 2006. He has also just had a fantasy short “Tommy and the Trolls” published by Horror LCC in their anthology, Strangely Funny which came out in August of this year.

James lives in Manchester with his wife and two daughters, no pets as everyone suffers with allergies. 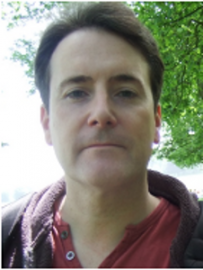