I.M. Maynard is a survivor...middle school survivor, that is, having successfully navigated the landmines and pots of gold that occur daily during the middle grades.

Middle school was also the period in I.M. Maynard's life when he was severely bitten by the writing bug, a devastating condition that has consumed enormous time and energy, ultimately leading to his writing of Roger Tarkington and the Magic Calendar: Quest for Middle School Greatness, the first in his modern day middle grade time travel series. 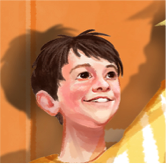