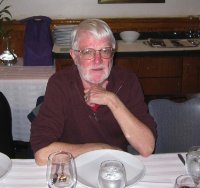 From Amazon.com:
Award-winning author Hank Quense lives in Bergenfield, NJ with his wife Pat. They have two daughters and five grandchildren. He writes humorous fantasy and scifi stories. On occasion, he also writes an article on fiction writing or book marketing but says that writing nonfiction is like work while writing fiction is fun. A member of the Science Fiction Writers of America, he refuses to write serious genre fiction saying there is enough of that on the front page of any daily newspaper and on the evening TV news.

Zaftan Entrepreneurs is the first book of a trilogy. In it, an alien mining ship discovers a planet that holds promise to be a mining bonanza. Unfortunately, it is inhabited by humans, dwarfs, elves and other races and they object to the mining expeditions.

Zaftan Miscreants is the second book in the trilogy. It is awash with unusual characters and filled with bizarre plots

Hank's previous works include Tales From Gundarland, a collection of fantasy stories. Readers Favorite awarded the book a medal and EPIC designated it a finalist in its 2011 competition. His Fool's Gold is a retelling of the ancient Rhinegold myth and Tunnel Vision is a collection of twenty previously published short stories. Build a Better Story is a book of advice for fiction writers.
HIs latest work is a Shakespearean spoof called Falstaff's Big Gamble. It combines the characters and plots from two of Shakespeare's greatest plays; Othello and Hamlet.

Altogether, Hank has over fifty published short stories and a number of non-fiction articles
Hank has initiated a series of lectures and workshops to share his expertise in creating fiction and publishing books. Create A Short Story is a 4-session workshop in which the participants design their own short story. He also gives a two-part seminar on Self-publishing a book and Marketing and Selling the self-published book.