Interview with Gwen Li about her book, The Switch Sisters

I'd had the idea of writing about a family of Chinese witches for a while. I loved stories with fantastical elements as a young reader, but never came across a book with a magical protagonist who looked like me. I also wanted to write about immigration and race in America, but I knew that I would have to bury those ideas under a really exciting story to make it work.

The process of coming up with that story was actually relatively painless. One weekend I had to take a long and rainy bus ride from Boston to New York. I hate bus rides, but I was with a good friend who is really good at helping me calm down and organize my thoughts, and we ended up spending the entire ride talking about my ideas for the book. She was super--she wrote down what I said in an outline and provided amazing feedback. By the time I got to New York, I had a map of the characters and general arc of the plot. It was the most productive bus ride I’ve ever had!

This is a hard one. I think there are elements of me in all of my characters--except the evil ones, of course! Like Mara, the oldest sister, I once tried to downplay my Chinese-ness and worried about how well my parents were assimilating. But I also identified with Marie's discipline and Morgan's 'just-do-it' attitude, and I'd like to think I'm as open-hearted as Mina, the youngest sister who's always tagging along (and making her older sisters worry about her).

Definitely. According to the Census Bureau, Asian Americans are the fastest growing racial/ethnic group today, and yet Asian Americans are rarely represented in literature. I think this is especially true in young adult and children's literature. In fact, NPR's Codeswitch, a blog about race and ethnicity, recently ran the headline: "As Demographics Shift, Kid's Books Stay Stubbornly White". Which is kind of crazy, when you realize that 50% of kids under 5 in the US are not white. That number is only growing.

On a very basic level, I wanted to make the Switch sisters Chinese to give Chinese American girls more literary heroines. I think this is important because identifying with a character in a book can create worlds of opportunities. As I mentioned, I loved witch stories as a young reader, but since all of the witches in the books I read were white, it was hard for me to imagine myself as a witch without also imagining myself as white. This was a failure of imagination on my part, to be sure, but it was also a failure of the book industry.

It's funny, but when I first started writing fiction I almost exclusively wrote race-neutral characters, which in America, means white characters. Those stories were horrendous. I told myself that race shouldn't matter, but the truth was that I was afraid to look at my characters and interrogate their histories. As a result, my characters were superficial and dull--absolutely dead on the page. The first story I wrote with an explicitly Chinese protagonist was the story that made me feel like I could actually be a writer. That I had something original to say, and could write it in a way that felt true.

Some people want to cure cancer or go to the moon or be President. I've always wanted to write a really great book. Of course, it took me a while to admit it--even to myself. For a while I pretended I wanted to cure cancer or whatever too. But the truth has this way of coming out.

Everywhere! When I first started to write fiction, everything I saw--a beautiful concert, an incident in class, a dirty street--seemed like a potential story. The impulse to write came from the desire to preserve and articulate some passing beauty, which was by nature transient and elusive. As I wrote more, however, I realized that if I were to write all those moments I'd end up with a lot of pretty boring stories and just a few interesting ones. Plus, who has all that time? Eventually I learned to only write the stories that broke my heart over and over again.

Honestly, it feels much better than I expected it would. I was shocked that people were actually interested in the book--it was even an Amazon Teen Fantasy Bestseller for a week--and I've been getting a steady trickle of really warm responses that make me feel all fuzzy and embarrassed (in a good way). It's wonderful to think that something I made may be providing someone the companionship and joy that books have always provided me.

That said, some author, I can't remember who, said in an interview that it was a lot more fun to be a writer than an author, and so far, I agree. There's nothing quite like the thrill of staring at an unwritten page.

Yes, tons! I'm planning to write sequels. I envision this book as the introduction to a series. I don't want to give any spoilers, but I'm pretty sure the next book will be about the twins, Marie and Morgan, who get into a huge fight over something very important (like a cute boy) and stop talking to each other.

Books that are funny and heartbreaking at the same time and say something meaningful while telling a helluva good story. Books that have great sentences. Roald Dahl was probably my first book love, followed by Meg Cabot/Jenny Carroll and Phillip Pullman.

Write, write, write. Sit down every day and write, and eventually the book will be written.

Hmm...What was that brilliant thing that Dumbledore said in the last Harry Potter book, when Harry asks if something was real or inside his head? "Of course it is happening inside your head, Harry, but why on earth should that mean that it is not real?" 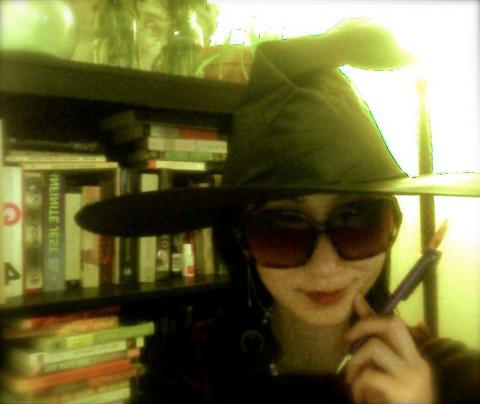