Joining LitPick today for Six Minutes with an Author is Fred Holmes! Fred is the author of The Ugly Teapot. Fred’s background is in film and television. He has been nominated for Emmys five times, and has won twice for writing and directing children’s television. Both of the Emmys he won were for a syndicated television show called IN SEARCH OF THE HEROES.

The Ugly Teapot is a fantasy action adventure story filled with a fair amount of humor.

A magic lamp. A fourteen-year-old girl with three wishes. What could go wrong? Answer: a lot. Especially when she uses her first wish to bring her dead father back to life, and her second to bring him home. Doing so brings evil men with him, men willing to kill her father and her friends to possess the lamp. With only one wish left, the girl can't save both. So who will she choose? Her friends or the father she just brought back to life?

I didn’t set out to write novels. Actually, I didn’t start out as a writer at all. I began my career as a director in films and television, so initially I was taking someone else's words and turning them into images on a screen. That taught me a lot about what not to do. So, when the opportunity came for me to write my own scripts, I was more prepared than most. Screenplays (and teleplays) have their own unique language which is very visual, and because of its conversational quality, I found it relatively easy to master.

Writing spec screenplays in Hollywood is a challenging endeavor, but I had a lot of encouragement from people like Lou Diamond Phillips with whom I co-wrote a screenplay, and Gerald R. Molen, who won the Academy Award for producing Schindler’s List, and who would later option two of my spec scripts.

During this time, a friend of mine who was writing a lot of Disney shows read one of my scripts and suggested I turn it into a children's novel. The idea terrified me. You know how some actors feel starring in a movie is great for the money, but that "real actors" are on Broadway? Well, that was how I felt about writing scripts—that the real writers were writing novels—and I wasn’t a real writer. Anyway, my friend challenged me to try it, and that screenplay became my first novel, The Ugly Teapot.

The person who made me wish I could write novels was Ray Bradbury. To this day, his novel, Dandelion Wine, remains my favorite book. I first read it when I was a kid and absolutely loved it but never imagined myself being able to follow in his footsteps. He has a way of looking at the world that is totally unique and a gift for describing that world using words that are unparalleled. It’s that simple, and that difficult. And even though I accept the fact I will never be the writer he was, the beauty of his novels makes me want to try.

It broke my heart when he passed away, but before he did, my friend, Jerry Molen, was working with him at Universal, trying to turn Martian Chronicles into a feature film, and Jerry told him how much I loved Dandelion Wine. To my amazement, Mr. Bradbury not only signed a copy for me, he also drew me a dandelion and wrote, “This dandelion’s for you!” He will never know how much that meant to me.

As I’ve said, my favorite book is Dandelion Wine, and I guess I gravitate toward those stories that have a whimsical quality. Because of that, I love fantasy, especially low fantasy. I want to believe that the fantastical exists all around us. Fortunately, I live in a time in which there is a lot of great fantasy being written, both high and low. I’m a huge fan of everyone from George R. R. Martin, to Orson Scott Card, to Patrick Rothfus, to Neil Gaiman, to Terry Pratchett, just to name a few. They have picked up the torch from Ray Bradbury and are carrying it into the future with panache.

What advice would I give to an aspiring author? Run away! Quickly, before they catch you! Just kidding. But to be truthful, it is not an easy life. I work seven days a week, pretty much year round, and that includes most holidays. It’s a lonely life. It’s a frustrating life. But...if you’re lucky and you work really, really hard, there may come a time when someone you care about will read something you wrote, and they will turn to you with tears and a smile and say, “That’s beautiful.” And if you’re fortunate enough to have that happen to you, all of the hard work, all of the long hours, all of the rejection will suddenly disappear. And in that moment, you will be a writer, hopelessly, helplessly trapped for life...and I could not wish a better fate upon you.

Where do I like to write? Probably in an office I have at home. I say probably because it’s relatively quiet and secluded, and because of that, I find it easy to focus there. Plus, I’m usually by myself, so I can read my stories out loud, which, in my opinion, is crucial to good writing. However, if I had my druthers, I would have a place on the beach somewhere. I love the ocean, and I can think of no better place to write. However, I’d probably find myself wandering on the beach picking up sea glass, and wouldn’t get a lot of work done!

What else would I like to tell you? I guess I would want to say that your stories are a gift to the next generation, so make them a good gift. In a world in which so many people use their creativity to harm others, be one of those who gives something of value to others. Write stories that serve a grand purpose—that spread joy and happiness.

I know I probably sound like a hippy from the sixties, and if I do, thank you for the complement. But those of us who write have been given an unusual opportunity. We get to create worlds that have never existed, and to populate those worlds with flesh and blood characters who, in the face of adversity, go on to accomplish worthwhile goals. If you do your job right, people all over the world, people you will never meet, will be impacted by your stories in a positive way. Wow, what a rare and beautiful gift that is.

Fred, thank you for spending six minutes with LitPick. Congratulations on The Ugly Teapot. We loved reading that your book came from a screenplay you wrote, rather than the other way around. Can we expect to see The Ugly Teapot movie? 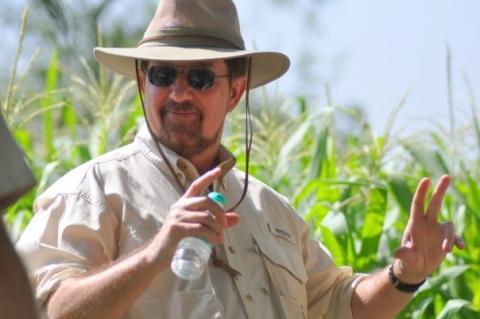