Edward Willett is the award-winning author of more than sixty books of fantasy, science fiction, and non-fiction for all ages. He won the Canada's top science fiction award, the Aurora Award for Best Long-Form Work in English in 2009 for Marseguro (DAW Books); the sequel, Terra Insegura, was shortlisted for the same award. Other science fiction books from DAW include Lost in Translation, The Cityborn, and the upcoming Worldshaper (September 2018), which will launch a new series. He's also the author of the fantasy novels Magebane (written as Lee Arthur Chane) and the Masks of Aygrima trilogy (written as E.C. Blake). Other titles include the five-book Shards of Excalibur series for Regina's Coteau Books, and the young adult fantasy Spirit Singer, which won the Regina Book Award at the 2002 Saskatchewan Book Awards. Ed began his career as a reporter, photographer, columnist, cartoonist, and eventually editor for the Weyburn Review, then spent five years as communications officer for the then-fledgling Saskatchewan Science Centre. He's been a fulltime freelance writer (and actor and singer) for twenty-five years. His nonfiction runs the gamut from science books and biographies to local history. He lives in Regina with his wife, Margaret Anne Hodges, P.Eng., their teenaged daughter, Alice, and their black Siberian cat, Shadowpaw.

The Six Minutes with an Author interview today is a bit like Six Minutes with a Whole Bunch of Authors interview. Today our interview is with E.C. Blake, who also writes as Lee Arthur Chane and Edward Willett! In the interview, you will read why this author writes under a variety of pseudonyms. Whatever name he uses, Edward is the author of science fiction, fantasy, steampunkish, and nonfiction books, plus plays, a weekly newspaper science column, and is a professional actor and singer!  Some of Edward’s many books include The Shards of Excalibur Series written as Edward Willett, and the three books Masks, Faces, and Shadows written as E.C. Blake.

It all began on a rainy day when I was 11 years old. I and a friend of mine, looking for something to do (and having the misfortune to live several years BI—before Internet—decided we’d try our hands at writing stories. I don’t think my friend ever finished his, but I did. It was called “Kastra Glazz: Hypership Test Pilot,” and after I wrote it my mother, who was a secretary, typed it up for me and I showed it to my junior high English teacher, Tony Tunbridge. He gave it a serious critique, pointing out what did and didn’t work in it, and I was hooked. I wanted to write more stories, only better ones. I’ve been writing ever since!

I began writing because I was a huge reader—the kid who would win the prize at the end of the year for writing the most books in class. So in a sense, every author I read as a kid, from Walter Farley to Isaac Asimov, from Arthur Ransome to Robert A. Heinlein, influenced me. Another influence was my older brothers, in that they both read science fiction and fantasy, so those were the books lying around the house. I wanted to be like them, so I began reading SF and fantasy, too. Which is why my aforementioned first short story was about a hypership test pilot!

A lot of my books, even the ones for adults, have as their main character someone who doesn’t quite fit in to the society in which they live—or if they do (as Mara does in Masks, the first book in The Masks of Aygrima trilogy I’m writing for DAW Books as E.C. Blake) then they’re thrown out of it. In other words, my characters are the ones who never quite fit in. I suspect that reflects my own experience of moving from Texas to Canada when I was eight years old. I never quite felt I fit in, either, and I still feel that way more often than not. I always see myself as a bit of an outsider. So I guess my favourite characters are outsiders, and my favourite stories seem to revolve around those outsider characters trying to find out where they fit in the world around them. But I hasten to add my books are definitely not autobiographical. My characters often end up completely overthrowing the society in which they live, which is something I can assure you I’ve never done…not yet, anyway. :)

There are really only two pieces of advice for people wanting to become authors: read, and write. You have to read, read, read, read, read, because that’s the only way you internalize the ways that stories are told, that you get a sense for how an adventure tale is paced, how language can be used to set a mood, how action scenes can be made vivid and exciting. And you also have to read, read, read, read, read to be sure you’re not simply rehashing tales that have been told by multiple (and quite possibly) better writers than you in the past. This is particularly true in science fiction and fantasy, which more than most genres are constantly in conversation with themselves and with the older works in the field…and have editors and readers that know those older works well. And then you have to write, write, write, write, write. There are various estimations as to how many hundreds of thousands of bad writings you have to get out of your system before you get anywhere close to writing at a publishable level. I usually go with 500,000, which is probably about what I wrote before I wrote something that was published. Writing is like any other skill. You can only improve it with practice.

What is your favorite place to write?

I do have an office in my house (I’ve been a full-time writer for more than 20 years now) but I rarely write fiction there. I tend to write in public places like coffee shops. It’s mostly just for the change of scenery. Background noise doesn’t bother me as long as it’s a kind of wash of sound. If someone is sitting close enough to me that I can make out the details of their conversation I’ll put on headphones and listen to music instead.

The one thing I always get asked about is why I write under different names. My real name is Edward Willett, and it’s under that name that I’ve written most of the more than 50 book of fiction and nonfiction for children, young adults and adults I’ve had published. But I have also written as Lee Arthur Chane and now as E.C. Blake. Both of those pseudonyms are for books published by DAW Books, and it’s really just because I keep changing what I write.

My first three novels for DAW Books were science fiction: Lost in Translation was the first, followed by the two-book series Marseguro (winner of the 2009 Aurora Award for best Canadian science fiction novel in English) and Terra Insegura (later released in an omnibus edition titled The Helix War). But fantasy sells better than science fiction, so DAW asked if I’d consider writing a fantasy novel—which I was more than happy to do. That resulted in Magebane, written under the pseudonym Lee Arthur Chane simply because, for DAW readers, Edward Willett was the name of a science fiction writer, not a fantasy writer, so it was though a new name to go with the new genre might encourage more readers to pick up the book.

But after Magebane came the Masks of Aygrima trilogy…which were different again. Magebane was a stand-alone epic fantasy with some steampunk elements. Masks, Shadows, and the third book, Faces—which will be out in July 2015—are essentially young adult fantasy novels, and written quite differently from Magebane. So I became yet a third writer, E.C. Blake.

I want to point that out to readers because, if you like E.C. Blake's, there’s a very good chance you might also like Magebane by Lee Arthur Chane, or especially Edward Willett’s new fantasy series, The Shards of Excalibur, being published by Coteau Books…because they’re all the same person: namely, me. And under whatever name I write, I do my best to offer readers excitement and entertainment. I began writing because I loved reading, and wanted to create stories that other readers would enjoy as much as I enjoyed the stories I read. I hope maybe I’ve done just that.

You can find out about all my books at my main website, www.edwardwillett.com. E.C. Blake also has his own site, at www.ecblake.com. There’s also a website for The Shards of Excalibur, at www.shardsofexcalibur.com.

Thank you so much for spending six minutes with LitPick and introducing readers to a few authors! And thank you for explaining using a pseudonym. 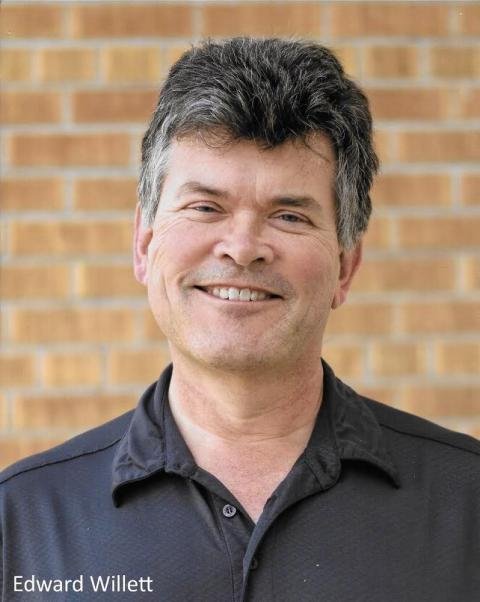