Meticulous to the point of obsession and ambitious to the point of anxiety, E. A. Setser is a career author and publisher trapped in a day jobber's body. He holds a degree in accounting, which has nothing to do with his job as an optical lab tech, but it probably helps with his being the founder of Social Detriment Publishing. Maybe.

Originally from Tennessee, E. A. and his wife, Celia, and son, Tavin, have been working to escape the Bible Belt. They have now made it to Lawrenceburg, Indiana.

LitPick got to interview author E. A. Setser, author of The Epimetheus Trial fantasy thriller series: Elder Blood (Book One) and Into Antiquity (Book Two). "Where the first book has travel and intrigue, the second has rooted families and secure jobs," says our LitPick reviewer. "A great development as characters meet these challenges."

Where do you get your best writing done? Do you work better, say, in nature or in organized areas? I've moved a few times since I took up writing—and took it seriously—and eventually, my spot on the couch in the living room becomes my best writing spot. I can get it done in other parts of the house, such as in the bedroom or at other places when I travel. But my pace and quality never feel quite as good as when I write from my living room.

Do you work better alone or when you can interact with others? I like having limited human interaction available to me, but sometimes I need my solitude. Going back to the last question, I feel more distracted writing alone in my bedroom than I do writing with my family around in the living room. I need noise to focus, either the TV or my Pandora station. But sometimes, I need that noise to come with the guarantee that nobody will abruptly start a conversation with me.

Do you have a favorite character you've created? How aare you most like that character? I have a few favorite characters, but the first one that comes to mind is SenRas. He's an elderly colonel who works to undermine the terrorist influence in his military, while working directly alongside said influence. He subverts them in plain sight and goes undetected. Before joining the military, he had been a hitman, but a bogus hit sent him on the run. Along the way, he became particularly good about dusting over his own tracks. That skill set would later come into play with his heading up the Ministry of Covert Affairs, which is officially presented as the Ministry of Human Resources.

I recently started having Elder Blood converted into an audiobook. My narrator/producer told me that SenRas seemed to start off as a throwaway character but was his favorite by the end. That's basically how he developed for me. He was only going to be present for one scene, but then I realized I could do so much more for him.

When you create stories, do you prefer paper or digital? Or a combination of both? Definitely digital. I'm more organized with digital files than I am with papers, and I can read my typeface a heck of a lot easier than I can read my own handwriting, especially if the paper has gotten creased or the ink got smudged. I've got a dry erase board that I keep an ongoing shopping list on, and sometimes, at first glance, I'll mistake something I wrote for something else. usually something nonsensical.

What is most important to you? Writing or book promotion? There was a while there when I didn't do any book promotion because everything I learned and tried to apply fell flat. That often discouraged me with my writing, but then writing would become a means of cathartic spite against my own failings and the deluge of garbage advice being sold to independent and self-published authors. Writing is still cathartic and therapeutic for me, but that spite toward garbage advice is no longer an issue. The big thing is that I got off of social media. I found some better sources for marketing advice, which are beginning to show promise.

So, obviously, I need to write in order to have something to promote. If my promotions feel like they've been worth the effort, writing is more fun and just a therapeutic part of my everyday life. If they're not, I can get discouraged, but it circles back to writing anyway.

What do you like to do when you're not writing? I play a lot of video games. That was actually what got me started in writing. I like the storytelling mechanics in a lot of games. My son and I like to speculate about hidden layers and aspects to the stories in some of our favorite games, filling in gaps and backstories that will probably never actually be spoken on. But I've taught him not to get so attached to his theories that he can't accept when something else comes along that invalidates them. I don't want him to turn out like some of the more toxic fandoms out there.

Do you have any upcoming book projects you'd like to share here? As I said, Elder Blood is being turned into an audiobook. That's due out this summer. Into Antiquity will follow, depending on my budget and my narrator/producer's schedule.

Also, Book Three of The Epimetheus Trial, titled Beyond the Veil, is due out this summer. There are yet more layers to be peeled back for reveals that most people won't see coming but should make sense once it comes to light. A new challenger approaches, but they've been there in plain sight this whole time. 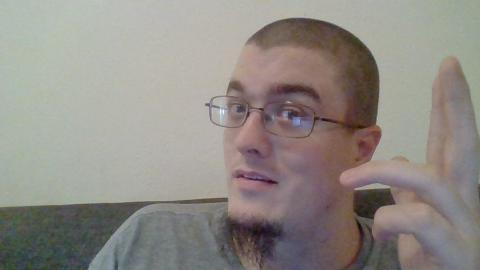