Joining LitPick today for an Extra Credit interview is Deborah Hopkinson! She is joining us from Nerdy Book Club, also known as #NERDCAMP, which we think sounds pretty cool! Deborah is the author of more than 40 books for young readers, including picture books, middle grade fiction, and nonfiction. She is a presenter at schools and conferences and a frequent instructor at writing workshops for adults.

Deborah has received awards for many of her books including, The Great Trouble, Apples to Oregon, Keep On!, Knit Your Bit. Deborah’s most recent book is A Bandit’s Tale, The Muddled Misadventures of a Pickpocket.

It’s more a combination of the two, I think. While I do not use extremely detailed outlines, I often develop a plan in advance so that I have a general sense of beginning, middle, and end. This plan, though, can shift and change directions as I work. In nonfiction, I might discover new sources, and in fiction, the plot or characters might develop in different ways than I originally envisioned.

Students ask me this all the time and I always say that while people I know don’t usually appear as characters, I have consciously used my dogs in my books. My Golden Retriever, Kona, inspired both Shakespeare in Into the Firestorm and Piccadilly in The Great Trouble. Kona is no longer with us, and I haven’t yet found a place for my dogs Rue and Brooklyn. But I might!

I don’t actually think of it as writer’s block. However, I do sometimes get tired or stale or am not quite sure how to solve a problem in the story or complete a scene. I find that resting my eyes and my brain helps. So I will step away from long hours at the computer to take a walk, go to the gym, sweep the floor, or even just take a shower. When we write, it is both our conscious and unconscious working, and so even when you are not sitting down, you can be thinking about your story.

Well, I have always thought I’d love to live in 19th century London, though, of course, I wouldn’t want to be a scullery maid! Recently I’ve been working on a collaborative project with other authors about the wives of Henry VIII. Although, once again, one wouldn’t actually want to be a peasant, and Tudor England would only be tolerable if one were a noble at court, it has been a fascinating period to learn about.

I thought that the Harry Potter books were great on film; I also enjoyed The Hunger Games.

A difficult question! I believe I would like to have lunch with Charlotte Bronte and ask her what it was like to write Jane Eyre and how exciting it was, after so many years of failure, to finally see that book become a success.

Wild Card Question: You have written picture books and middle grade fiction and nonfiction and you are an instructor at writing workshops for adults. Is it harder to write books or teach others how to write? Do you find these seemingly different activities to be similar?

I find it is much harder to teach others to write than to do it myself. Maybe that’s because I am not sure I really know how to explain what I do, or even how to do it. For me it is sometimes a very intuitive process.  I practice and rework a piece over and over again until it, somehow, sounds right. It’s more akin to knowing when a note in music is off, I suppose, than anything very logical.

When I do teach, I am most comfortable giving workshops on nonfiction, a genre that comes more easily to me than fiction. I also enjoy hearing other writers or editors talk about the writing process – I always learn something. And that’s really the best thing about writing: one never stops learning!

Thank you for spending time with us, Deborah! We loved learning how you have incorporated your dog, Kona, into your books.

I began as a reader! I wanted to be a writer since fourth grade, and kept a journal in high school. But even in sixth grade I liked writing research papers (and I still like writing nonfiction). But I didn’t actually begin writing stories to try to sell until years later, when my daughter was three and I was reading children’s books to her.  I read a lot, which might explain the variety of things I write about, from the Titanic, to cholera, Helen Keller to the Empire State Building.

I can’t point to one specific book, author, or teacher. But losing myself in stories as a girl made me want to write. One of my favorite books was The Secret Garden. I also fell in love with some classics -- Jane Eyre, Pride and Prejudice and David Copperfield -- while still in middle school.  It just seemed like the best thing in the world I could do – and it still does.

I do school author visits all over (I just got back from New Delhi) and this is a question I get asked a lot – but one that’s hard to answer. I guess I’d have to say I love writing about the 19th century most of all. My new book, The Great Trouble, about Dr. John Snow and the 1854 cholera epidemic in London takes place just about in the middle of the period.  It’s a fascinating time in science, history, civil rights, and literature.  Some amazing people lived then: Dickens, Darwin, and Lincoln to name just a few.

No surprises here: read (lots of different genres) and write as much as you can!  Think of it as following a path. You start out, put one foot in front of the other – and most of all don’t give up.

Also, remember that all writing is practice. I became a published picture book author in part because I learned to write grants for my job in the field of higher education fundraising. The practice I got in my job made me more comfortable with being edited – and being rejected. Writing reviews for LitPick and thinking about what you read is a great way to begin too.

I don’t do well in coffee shops (too many distractions) but I’ve have written in the middle of the living room with kids running around, in hotels, and on airplanes.  But since I (finally!) left my day job a few months ago, I’ve taken over our big dining room table. I’m surrounded by house plants and look out at trees in the back yard.  It’s quiet and I have lots of room to pile up my research books. My two dogs like to curl up at my feet – though mostly they’re just waiting to go to the park!

I want to say thank you.  You are the future of reading and culture.  When you pick up a book or write a review for LitPick, you are supporting creativity.  Thank you! 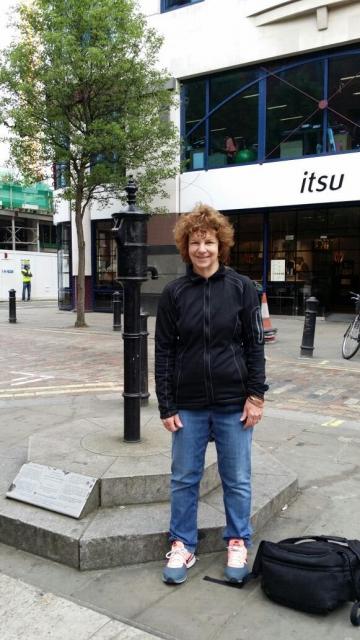