Storyteller, writing teacher, Queen of Revisions, and founder of Mims House publisher, Darcy Pattison has recently been motivated by zombies (which helped her meet a goal of running a 5K) and chocolate (which keeps her young). Always active, before her tenth birthday, she (almost) climbed the Continental Divide, turning back at the last 20 yards because it was too steep and great climbing shoes hadn’t been invented yet. This year, she biked in Poland and hiked the Rockies (her first 14-er! Made it to 13.). On her bucket list is kayaking the Napali Coast, eating curry in Bombay, and catching a glimpse of a puma in South America.

My writing process falls in the middle. I outline some, write some, and then revise the outline based on where the story is going.

Yes! I draw from my life when I write, and that means that characters often combine certain traits from people I know. That includes evil characters. My book, SAUCY AND BUBBA is a retelling of the Hansel and Gretel tale. The step-mother was drawn partly from my experiences with step-fathers. So, I changed it from a man to a woman, but kept certain character traits. I almost always make some sort of switch like this, so seldom would my friends actually recognize themselves.

I have taught Freshman Composition at a college level. That’s the first writing class that most college students take. Sometimes, a student said, “I don’t know what to write.”

Either Lord of the Rings by J.R.R. Tolkein or Dune by Orson Scott Card.

Princess Bride. It’s one of the few that I actually like the movie better than the book.

Katherine Paterson. When my first book was published, a student thought I WAS Katherine Paterson, author of Bridge to Terabithia, one of my favorite books. Because our names are so similar—Paterson and Pattison—I’ve gotten that several times. But I’ve never had a chance to meet her.

Wild Card Question: You are quite an adventurer! You’ve (almost) climbed the Continental Divide, biked in Poland, hiked the Rockies, and your bucket list contains kayaking the Napali Coast, eating curry in Bombay, and catching a glimpse of a puma in South America. How did you select these items, have you completed any more of them, and have you added any more to your list?

My husband and I were recently talking about planning vacations. Let me ask you: on a vacation, do you want to SEE something or DO something? I want to DO. I’ve biked in Poland and on Nantucket Island. I’ve floated the Grand Canyon. I’ve floated the Buffalo National River. I’ve hiked on the Hawaiian Island of Kauai and looked out over the Nepali Coast, but I didn’t get to kayak those waters. I’ve written about Abayomi, the Brazilian Puma, an orphaned puma, but I’ve never been to Brazil to see one in the wild. My friend is from India and promises to take me there to hike in the foothills of the Himalayas.

But this year, I’m planning to hike in the highlands of Papua New Guinea. I want to sail in waters where I can spot a great blue whale. I want to DO.

Darcy, thank you for joining LitPick for an Extra Credit interview! Congratulations on the release of your new book, BURN: Michael Faraday’s Candle!

BURN: Michael Faraday’s Candle synopsis: What makes a candle burn? Solid wax is somehow changed into light and heat. But how? Travel back in time to December 28, 1848 in London, England to one of the most famous juvenile science Christmas lectures at the Royal Institution. British scientist Michael Faraday (1791-1867) encouraged kids to carefully observe a candle and to try to figure out how it burned. Known as one of the best science experiments ever, Faraday’s passion was always to answer the basic questions of science: “What is the cause” Why does it occur?”

Since Faraday’s lecture, The Chemical History of a Candle, was published in 1861, it’s never been out of print. Oddly, till now, it’s never been published as a children’s book. Faraday originally gave seven lectures on how a candle burns. Pattison has adapted the first 6000-word lecture to about 650 words for modern elementary students.

Author of children’s fiction and nonfiction, teacher resources, audiobooks, and how to write books, Darcy Pattinson joins LitPick for Six Minutes with an Author! Darcy’s books include Abayomi the Brazilian Puma: The True Story of an Orphaned Cub, Wisdom the Midway Albatross, Longing for Normal and the Kell series. In addition to being an author and founder of Mims House Publishing, Darcy has run a 5K, biked in Poland, hiked the Rockies, and almost climbed the Continental Divide.

I didn’t start writing for publication until I was grown up and had kids. I read hundreds of children’s books to them, books of fiction, nonfiction, picture books and novels. I fell in love with stories, but this time, I wanted to be on the flip side of stories: I wanted to write the stories that others read. One of the first stories I worked on was a historical fiction about Christopher Columbus. Remember the famous poem that starts, “In fourteen hundred and ninety-two, Columbus sailed the ocean blue.”? 1992 was the 500th anniversary of his sailing from Portugal across the Atlantic to discover the “new” world of North and South America. One of the first manuscripts I submitted—which was rejected—was about that voyage.

I have many mentors: every book I’ve ever read. A life full of books has influenced me more than anything. Growing up, there were seven kids in my family. Every night, we had story time and I remember clearly the night it was my turn to read the family story for the first time. We lived out in the country, so my mother asked for the bookmobile to stop at our house. People from thirty miles around would come to my house because the bookmobile was there. I remember climbing up the steps into the bookmobile and being awed by so many choices. And once, I asked for a specific book. The next time they came, I was amazed that they had brought me that book. I still love libraries!

In sixth grade, I read J.R.R. Tolkein’s Lord of the Rings trilogy, Frank Herbert’s Dune trilogy, and Orson Scott Card’s Ender’s Game. I was hooked on science fiction and fantasy. However, as a writer, I’ve learned to write both fiction and nonfiction, picture books and novels. I like the variety. Give me a choice of books, though, and I’ll go for a sff any day.

Read. Pour language into your heart and soul, or else there will be nothing to pour out.

My husband and I own a three-story Victorian house in the historic district of our town. It’s a blue house. Every day, I drive to the Blue House and climb to the third-story attic—my writing office. That’s where my best work is done.

Stories fill my life with joy. Whether true stories or imagined stories, I am always listening to stories from friends or audiobooks, and I am always reading several books. Life without stories would be boring.

Darcy, thank you for spending six minutes with LitPick! I think many authors would like to borrow your writing office! 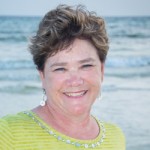