Joining LitPick today for Six Minutes with an Author is Christopher Hart. Christopher is the world’s best-selling author of How-To-Draw books.  His books have been published in more than 20 languages, and over six million copies of his titles have been sold! Chris has had the rare distinction of having had the top 1, 2 & 3 art books in the country, simultaneously, as reported by Nielsen Bookscan. Christopher’s books can help you draw comics, manga, dogs and cats, cartoons and people.

If you have a question for Chris, visit his website (link is at the end of the interview) and email him a question. He reads and responds to every email he receives!

I can't remember a time when I didn't draw. The entire point of my childhood was to wrestle some of my dad's typing paper from him. I also discovered how useful cartooning could be. One day in high school biology class, I drew a small drawing on the chalkboard. The biology teacher loved it and left it up, instead of erasing it. A lightbulb went off in my head. The next day, I drew a bigger picture. She didn't want to erase it and left it there, too. Soon I was filling the entire chalkboard with my drawings so that she had no place left to post her formulae and equations. I was diabolical that way.

Disney animated feature films, MGM animated shorts, and Warner Brothers animated shorts. However, for me, it was important to push myself away from my early influences in order to grow my own style.

Get your advice from authors who have been published traditionally, by established publishers. Far too often, I see people in internet forums getting and giving advice - most of it wrong - from people who have never been published. It's challenging to get published, but the good news is that you can reach out to established authors, and some, like me, will get back to their readers with thoughtful answers.

Near the kitchen, of course.

Drawing is like learning a language. At first, it takes effort. But if you persist, you suddenly find that you're actually speaking and understanding it. If you keep drawing, suddenly the things that were tough to draw all make sense, as if you cracked the code! It's an exhilarating feeling. My books are designed to help you achieve that goal, and with a whole lot of fun along the way.

Thank you, Christopher, for spending six minutes with LitPick! We love your story about how you filled your biology teacher’s chalkboard with drawings! You make it sound like anyone can draw if they use your books. We’ll definitely have to try it! 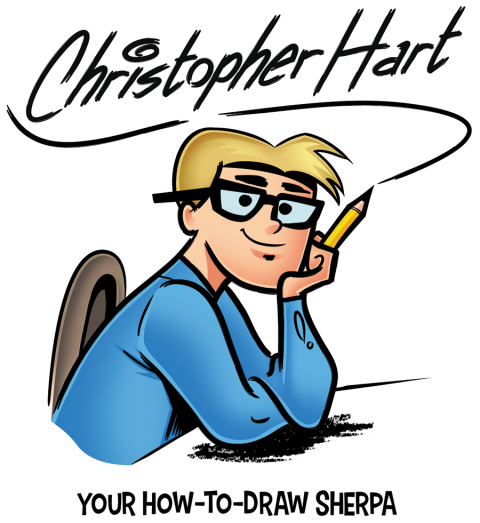