Here on the set of LitPick​’s Six Minutes with an Author is Carolyn Adams! Carolyn is the author of the thriller novel Ruthless. You could say that she was born to be a horror writer – she was born on Halloween 1976 and her name is Carrie! A creative soul who went to USC Film School, Carolyn loves all things macabre and enjoys writing on her blog, fanfreakingtastic.com. She is also a stand-up comedian.

I started writing at a very young age. My first big success was in second grade, when we all had to write a book. Mine was titled Spirit. I remember thinking that title was spooky, but with a panache of class. Spirit was about a woman who took a vacation and rented a house in the country, only to discover the house was haunted! I was writing thrillers from the get-go, y'all. We had to read our books to the class. I went last, we ran out of time, and the teacher stopped me. The other kids groaned in disappointment. I'd thought my story was good, but the fact that my classmates were engaged and actually wanted to know how the story ended surprised me in a very good way. I was hooked. Ever since, I've been chasing the approval of others via the medium of storytelling.

Edgar Allan Poe and Stephen King jump to mind. My mom raised me on Poe, reading ‘The Raven’ and ‘Annabel Lee’ to me when I was little. Apparently, she'd looked up how to create a horror writer, and she did a bang-up job. In the sixth grade, I saw a friend reading King’s Pet Sematary. I was jealous that he was reading a novel for grown-ups, so I started reading King, too. For a long time, every Christmas I'd receive a King novel. I loved those gifts. I was born on Halloween and have always had a strong attraction to the dark side of things.

As much as any novel or poem influenced me, however, I was impacted by reading nonfiction books about the supernatural and serial killers. A book called Mysteries of the Unexplained had a huge impact on my imagination. Another huge influence on me was Gary Ridgway, aka the ‘Green River Killer.’ He is the most prolific serial killer in U.S. history, and he dumped his bodies within a mile of my house during my elementary school years. Interestingly, my mother still let me run wild in that forest. I once wrote a blog post about a psychic dream I had about Gary. It's one of my favorite blog posts I've ever written, and it would make me happy if you gave it a look: http://fanfreakingtastic.com/a-story-about-a-nightmare/

Do you have a favorite book, character, or setting?

I am a huge fan of C.S. Lewis, both his Chronicles of Narnia and his nonfiction books. My favorite book is The Lion, The Witch, and The Wardrobe. Narnia is my favorite setting of all time; Reepicheep is probably my favorite character. Although C.S. Lewis didn't impact my writing very much, I think he impacted me as a person, both who I am and who I want to be. I view the world through his lens.

Another favorite setting is The Place from Albert Payson Terhune's novels about his collies. The Place was the Terhune summer house in New Jersey at the turn of the last century. To me, it serves as a platonic ideal of everything a home should be. Unfortunately, there's a deeply distasteful sprinkling of racism through Terhune's books, but the things that are good about them – his evocation of place, time, and character – are very good indeed.

Follow your bliss. That goes for anyone and any goal. Do whatever it is that brings you joy. Do whatever it is that puts you into a place of flow. Flow is that state of being where time drifts away, you're wholly engaged, and whatever it is you're doing - math, baseball, writing - takes over and takes you outside of yourself. From an early age, I've always been mystified by retirement. I never wanted a job that would require I retire from it. I wanted a vocation, a calling, something that I would pursue until the day I died. I wanted what I did for a living to give me life, not take away from the pleasures of living.

Honestly, anywhere. My one requirement is that I am near a window. I like to stare outside and see a city or trees or really just about anything at all. It keeps my head in the right place. Writing in a windowless office or facing a wall is incredibly depressing to me.

I went to USC Film School, and I still love production. So, I produced my own book trailer with the help of my friends. Jeff Martell directed and edited it, John-Paul Newton shot it, and Tom Emmons played the Wolfman. Like me, Tom is a comedian, and like a lot of comics, Tom is also a brilliant actor. I think it would be glorious if he played the Wolfman on the big screen. Before I ever became friends with Tom, I’d stare at him at comedy shows, completely weirded out that my character had come to life like some kind of Stephen King novel. Check out the trailer here: https://www.youtube.com/watch?v=xoEqBwHFCI8

Thanks for having me—I hope you enjoy RUTHLESS!

Thank YOU, Carolyn! You clearly have a passion for good horror that will surely be reflected in your novel. Ruthless looks like a thrilling ride; order it on LitPick now! 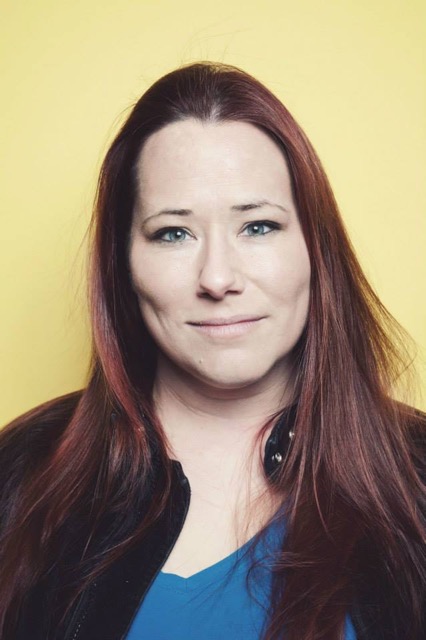