Like the main character Presley in her debut teen novel, THE TWELFTH OF NEVER, Brenda Ortega is a compulsive alphabetizer. She learned how to quiet the volume of it long ago, although – unlike Presley – Brenda’s method of control does not involve Elvis.

Brenda has written for newspapers in Seattle, Los Angeles, and Detroit. She lives with her husband and two children in Michigan, where she now works as a high school English teacher.

Today Brenda Ortega joins LitPick for Six Minutes with an Author! Brenda is the author of The Twelfth of Never and Fault Lines. She is an English teacher who credits her mother’s advice about how to make a meatloaf with influencing how she cooks, raises a family, teaches and writes. Brenda has run from a wildfire, held a baby gibbon in her arms and interviewed both Magic Johnson and Sparky Anderson!

I've been writing professionally for years, first as a newspaper reporter at outlets such as The Associated Press and Los Angeles Times, then as a freelancer for magazines and websites. Now I'm a high school English teacher, writing novels on the side.

I loved writing for newspapers in my first career. What better training for a fiction writer than to spend every day with a notepad in hand, talking to people, asking questions, learning new stuff, and writing about it? It amazed me how being a reporter gave me permission to get into the most personal conversations with people I’d just met. It taught me to look deeply, and to listen carefully, to find the angle that makes every person’s story meaningful and unique. I bring all of that to my fiction writing.

Does that answer the question? Maybe not…

When did I start writing? At the age of three. Sort of.

One day, ink pen in hand, I started doodling nonsensical swirls in the margins of my favorite Berenstain Bears book. I didn’t know how to write letters or words, but I wanted to produce the same magic I found in those book pages. Needless to say, my mom did not appreciate my creative impulse, so I got in big trouble! It’s funny; I still recall the book’s title and plot. The Bears’ Picnic. In the story, the bear family goes out looking for the perfect picnic spot but they run into one problem after another – bees, noisy airplanes, hordes of people, etc. – so they go home and spread the red-and-white checkered tablecloth on their living room floor and discover it’s the perfect place to be. That made me feel so cozy when I read it. Still does.

I come from storytellers, on both sides of my family, and I love listening to stories, telling them, and writing them.

I credit my daughter Carmen, who is my first reader/critiquer (and an insightful one at that), who believes in my work and wouldn’t let me give up when the road seemed too long.

However, I was lucky to have received direct influence from one of my favorites before he was well known: Christopher Paul Curtis. Now he’s a best-selling Newbery Award winner for Bud, Not Buddy. But in the summer of 1996, his first novel had just been released, he was practically unknown, and he was working as the writer-in-residence at an intensive, full-time summer writing institute for teachers that I was attending in Michigan (where we’re both from).

As part of the writing workshop, we all read his novel, The Watsons Go to Birmingham, 1963 (which went on to become a Newbery Honor Book), and I adored that story. I couldn’t believe how easily and beautifully it combined warmth, humor, tragedy, heartbreak, healing, and hope. It remains one of my all-time favorite books. Then Chris invited anyone who wanted feedback on writing to give him a piece to critique, and I knew I had to find the courage to pass him something. I decided to give him a short story I’d been inspired to write during the institute, a piece of fiction that sprang from a childhood memory.

When I nervously handed it to him, I told him I’d already rewritten it after receiving a harsh critique from a teacher mentor at the workshop, and I could no longer sense whether it had any potential or not. He took it home to read, and I chewed my fingernails to nubs. The next day, he gave me a typed one-page letter that began, “Shame on you! What you have done here is every critiquer’s nightmare. Instead of giving me a piece that needs work or that is ‘stuck’ or in trouble what you have done is given me writing that is in need of nothing.”

I still treasure that letter. I can’t count the number of times I’ve reread the paragraph urging me to believe in myself. “I have no doubt that you are a writer,” he wrote. “You’ve displayed flexibility that comes only from the love of craft. My only suggestion to you would be to have faith in what you do. Trust your instincts and be willing to defend them.”

At the end, he encouraged me: “You’ve got a real talent. Don’t stop!”

At first, I didn’t listen to that final piece of advice. I put fiction writing aside for several years, until the burning in my chest became too much to ignore. Once I started to write again, I couldn’t get enough of it. I worked and worked, and joined writing groups, and fought off doubt and disappointment. And I got my happy ending. That short story Christopher Paul Curtis critiqued is now the novel I’ve just released, Fault Lines.

I can’t say I have one favorite book. It’s too hard to pick, so I’ll give some examples of favorites. I love The Curious Incident of the Dog in the Night-time by Mark Haddon, written from the perspective of a main character with Asperger’s Syndrome, because the voice in that book is incredible. Truly mind-blowing. Then there is Story of a Girl by Sara Zarr, which delves so poetically into the psyche of a girl broken down by other people’s judgements of her. Also I love anything by Markus Zusak, because he’s so versatile and his gorgeous writing makes me want to linger and luxuriate on every page.

Here are my top 5 pieces of advice for aspiring writers:

•       Don't fall in love with your first draft, and conversely don't give up too easily on it. Find the balance, and be willing to work at it.

•       Hook up with a writing group made up of people who will give you honest feedback, both good and bad.

•       Be willing to hear criticism even if it hurts. Sometimes the stuff you don't want to hear is what you need to listen to. Then again, sometimes it's not.

•       Learn how to listen very, very carefully to your inner voice. It won't lead you astray.

In my fantasies, I have a little private hideaway with windows that look out on trees or water where I can escape to write for hours. In reality, I sneak into my basement and try to ignore the sound of the water heater, furnace, and sump pump. With a husband and two active kids (16 and 12), I take privacy wherever I can get it!

In the stories I’m driven to write, flawed characters must discover their voices, find their courage, choose to embody their best selves in the face of adversity.

In my first novel, The Twelfth of Never, the main character has a quirky neurosis: compulsive alphabetizing. It's one I share with her. My mind speed-sorts the letters from random words into alphabetical order on a daily basis. It happens instantaneously, which my students think is pretty cool. However, as a kid I feared the out-of-control alphabetizing meant I was mentally ill – because wouldn't that be a definition of the term? Unable to control one's own mind? Now I know we probably all have mental oddities that could classify us as less than normal, and there's a better word for it: human.

Brenda, thank you for spending six minutes with LitPick! Your story about how Christopher Paul Curtis influenced your career is wonderful! 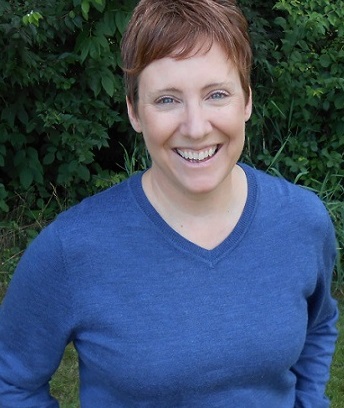