Amanda Rotach Lamkin was born and raised in rural Michigan. At eighteen, she moved to Lexington, Kentucky, to attend Transylvania University. She worked as a care provider for individuals with developmental differences, and later as a midwife and doula before taking a break from working outside the home in order to care for her four children. During that time she published her picture book, Meanwhile Miles. Unfortunately, her publisher closed months later, so she gave up, disheartened. Years later, she screwed her courage to the sticking point and tried again, achieving her goal of having a novel published. At her first book-selling event, she met the man who would years later become the love of her life. Sadly, that publisher also closed months later. In what was perhaps a temper tantrum, perhaps insanity, or perhaps divine intervention, she then decided to open her own publishing house, Line By Lion Publications, a place where authors around the world would come first and voices that might otherwise be ignored could be heard. She spent two years traveling the country with her kids and then husband, living in a tent, to promote the publishing house. Doing so gave her the self-confidence, connections, and financial means to leave an unhealthy marriage. Finally, she and the children settled in Louisville, Kentucky, and she later married the man she'd yet met years before. Together they bought an old barn on the river that they are turning into a house. She lives there still with her husband, children, and ever-growing menagerie, though she travels to sell books or engage in public speaking events. Books include Meanwhile Miles as "Amanda Huntley,” Hunter the Horrible as "K.A. DaVur," Alexandra Campbell: Private Eye to be re-released under "Morrigan Dewme," Charlotte and Daisy as Amanda Rotach Lamkin, and finally her newest, The Incredible Adventures of Absolutely Normal, also as Amanda Rotach Lamkin. Available public speaking topics include the following: Which Type of Publishing Should You Pursue?, How Opening a Publishing House Saved Me, Writing Science-Fiction and Fantasy, and Female Entrepreneurship, as well as creative writing programs for youth. You can follow her adventures at www.amandalamkinauthor.blogspot.com. For booking, please contact amandalamkinbooks@gmail.com. 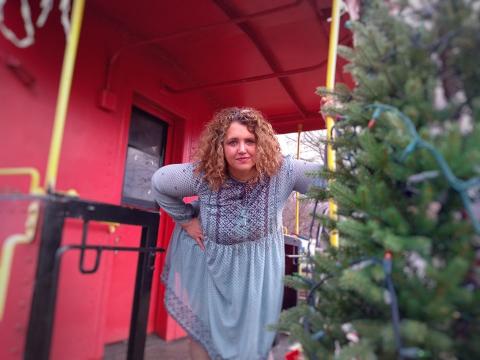