Today, Adi Rule visits LitPick for an Extra Credit interview. Adi is the author of Strange Sweet Song and The Hidden Twin, which was just released. Great news! If you’re in the Newington, New Hampshire area, you’ll want to know about an event coming up this Sunday, April 3rd at 1:00PM at the Barnes & Noble. Adi Rule, Erin E. Moulton, A.C. Gaughen and Erin Bowman, will be participating in a discussion/Q&A/signing event. Don’t miss it!

I wish I could outline, but I’m terrible at it. I do practice. But I tend to write one scene to the next, in order, until I’ve got a beginning-middle-end. Then I can figure out the story I’m trying to tell.

My mom is a writer, too, so I’d have to say this is entirely possible! I don’t tend to base characters on people I know, although there were a couple cases in my first novel, Strange Sweet Song, including the main character’s dad, whose mannerisms were loosely inspired by a conductor who was a good friend of the Boston Symphony. “The Hidden Twin” isn’t hiding any of my real-life friends, but the sun god is an homage to Ancient Egyptian mythology.

When I’m really into a scene and writing like a demon, it’s awesome! But I try to remember that writing is also my job, which means that I have to show up for work, butt in chair, even when I’m uninspired/sick/unfocused. I find that when I’m feeling stuck, my first instinct is to wander onto the Internet. Which never, ever helps! To keep myself in line, I use Freedom, which is a program that keeps you offline no matter how much you scream, unplug the computer, and cry in the rain.

Dinotopia. Because dinosaurs. Dinosaurs! A peaceful society with vibrant art and architecture, bright colors, and glorious nature all around. Also dinosaurs!

Rebecca by Daphne du Maurier. Hitchcock’s 1940 film really captures the eerie, tense, supernatural, uneasy feel of the book (even though the censors at the time required a bit of a ridiculous tweak to the climactic reveal). I also have to admit to a soft spot for that weird 2007 animated/CGI adaptation of Beowulf. The way the writers reimagined the story so Beowulf’s disparate adventures were all connected was very clever and effective.

Sy Montgomery. I would love to hear about all her adventures!

Wild Card Question: In addition to being an author, you sing in the chorus of the Boston Symphony Orchestra/Boston Pops. We’d love to hear more about this! What is it like to sing in this chorus? Are there any particularly memorable events that stand out for you? Have you ever performed when John Williams was conducting?

There’s nothing in the world like singing with the BSO and the Pops. Getting to work with conductors whose names you’ve grown up seeing on CDs -- it’s incredible. It’s also challenging. We do some tough music, and we memorize everything regardless of how long it is or what language it’s in. As far as highlights among highlights, I’d say the Brahms “A German Requiem” we recently did with Mo. Bramwell Tovey was particularly magical. And yes, I have gotten to sing under John Williams, who is just about the loveliest human there is. He actually apologized to us (the chorus) during a rehearsal because instead of getting to leave early, we had to sit on stage as they ran through “Jurassic Park” (which has no singing). He was so concerned about wasting our time, when it was like, we’re getting to sit on stage while the Pops play “Jurassic Park”! How amazing is that?

Oh wow! You’ve gotten to sing under John Williams! That must have been such an incredible experience! We are so impressed!

Freedom (https://freedom.to) sounds really interesting and useful! What great information! It sounds like something that could be helpful to authors, students, parents, or anyone who uses a computer or device, which is just about everyone these days!

Thank you so much for visiting LitPick so we could get to know you better, Adi!

I grew up in a writing household. My mom is a writer, and when I was a kid she was teaching fiction at a nearby university. Sometimes she had to bring me with her to class, where I would draw dinosaurs on the chalkboard. New Hampshire, where I'm from, has a very active writing community, and we were always going to some reading or launch or what have you. My friend Jasmine and I would entertain my parents and their friends with our "poet voices," which is what happens when elementary school kids are dragged to too many poetry readings -- think the languid breathiness of NPR personalities but with every other word drawn out like some kind of drunk iambic pentameter. I wrote and directed my first play when I was in 8th grade, and things just kind of snowballed from there.

One of the hardest, and most rewarding, parts of writing STRANGE SWEET SONG was trying to get the feel of the music itself across. The composer I kept coming back to as I struggled through that part of the process was Brahms.

That's a toughie! For setting, I have two. One is James Gurney's Dinotopia. My dad and I recently got to see the traveling exhibit of Gurney's paintings, and they are incredible! The other is Terry Pratchett's Discworld. Anything can happen there! And although the large struggles are totally epic (dragons! evil masterminds!), the small ones are just as compelling (boots!). I read those books like one eats potato chips, one after the other, handfuls at a time. My two favorites (so far) are SMALL GODS and THE AMAZING MAURICE AND HIS EDUCATED RODENTS.

Read a lot, in as many genres as you can put up with. Write a lot, in all genres and forms, to figure out what sort of writer you are today. Remember that taking the time to produce the finest, most polished stories (plural!) you can is the best route to publication, if that is one of your goals. And most importantly, know that you do not need anyone else's permission to write!

I write in my bed, which is a mattress on the floor, with a cat in the general vicinity. I had a real bed but it was old and eventually disintegrated, and I found the mattress was much easier for my old cat to get up onto, so here we are. There's a space between the bed and the baseboard heater, so my pillows are constantly squishing into the crack and I have to stop all the time and dig them out again.

I love hearing from people, so drop by my site or social network and say hi anytime! 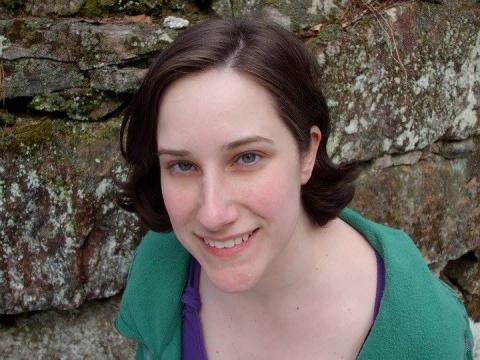