From Twinkle, With Love review by Booklover1111 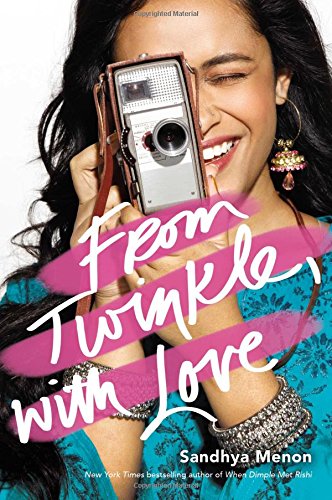 From Twinkle, With Love
by Sandhya Menon
Age Range - 12 and up
Genre - Chick Lit

Twinkle Mehra dreams of directing movies and becoming famous. So when Sahil Roy asks her if she wants to direct a movie together for the Midsummer Night art festival, of course Twinkle says yes! This also means Twinkle get closer to Neil Roy, her crush and Sahil’s twin brother! What could go wrong? Soon Twinkle starts getting emails from a secret admirer behind a mask called “N.” Twinkle is sure that it's Neil, but this starts a romance triangle that Twinkle has to keep a secret or else it could hurt a lot of people...including herself.

This is the second book I have read by Sandhya Menon, and so far I am very pleased. The story kept me intrigued by having a lot of dramatic incidents and by including hilarious comments. Although the main characters were pretty similar to the ones that I read about in When Dimple Met Rishi, there was enough of a change that kept me from getting bored. I found Dimple and Twinkle to have very similar personalities and they both had parents that seemed like the exact same people (even though they weren’t). Also, Rishi and Sahil were almost told like they were the same character. That is my only complaint. Otherwise, I loved this book!

There were a few mature statements, but it was mostly clean.
KEYWORDS