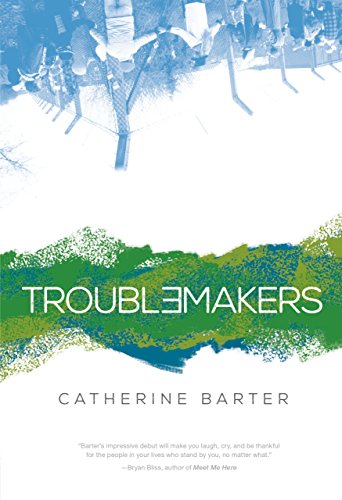 Troublemakers
by Catherine Barter
Age Range - 12 and up
Genre - Fiction

Troublemakers is about a girl named Alena. Alena never knew her mother because she died when Alena was three. Alena now lives with her half-brother and his boyfriend. Alena has been wondering about her mother for years, but suddenly her urge is getting stronger and stronger. She NEEDS to know more about her mom. She begins uncovering the secrets that have been kept from her all of her life, and she finds out her mom was a troublemaker. Just like her. Meanwhile a bomber called the East End Bomber has been placing random bombs around town. The police know the next bomb will explode.

I have to be honest, this book was kind of boring. I feel like the East End Bomber didn’t really fit into the story as much I hoped it would have. It seemed like something that was added late into the writing process. At the ending, the bomber was tied in a little more but not enough as it should have been. This book didn’t really grab me. I did like how much family was included in the story. It had a great storyline for telling the highs and lows of Alena’s family and really brought me into the characters' lives. Some parts made me smile and some made me feel Alena’s pain. This book had a great showing of emotions, but in the long run there was not enough action for me

This book was clean.
KEYWORDS