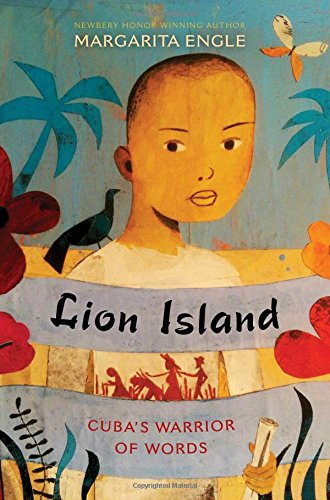 Lion Island takes place during the Cuban War of Independence, a time when Cuba was fighting for its freedom from Spain. This book shows three different perspectives. First, Antonio Chuffat. He comes from a long line of different races, which all play an important role in his life since cultural diversity is a big problem during this time. He is grateful for his messenger job. Next is Wing. Wing is a Chinese indentured servant who sells fruit. Antonio and Wing meet and soon become friends. This leads to Wing introducing his sister Fan to Antonio. These three easily become friends. This trio’s eyes begin to open to all of the hate and violence in their country as they see the riots, rebellions, and racial injustice all around them. They feel that this is their time to finally do something.

This book was written in a poetry format. It tells a story but through stanzas rather than the traditional prose of a novel. I liked this book because it provides different views into The Cuban War of Independence, which I hadn’t read much about before. This one was a good one to add to my collection. While I found myself having to look at the top of the page to know whose perspective I was reading from, this wasn’t a huge issue.

The reason I gave this book three stars was because I could clearly see the story the author was trying to tell, but I didn’t really feel that involved in the plot. I often found myself thinking about other things because there were no big events to grab my attention. It had a pretty mellow storyline, and I think this book would have been better with more action. On the other hand, I think that this story fit well with the poetry layout because I was able to see deeper into the characters' thoughts and feelings. Overall, I think that this book was okay. There were some boring parts, but at the same time lots of emotion was shown and I enjoyed that aspect of the story.

This book was clean.
KEYWORDS

Read more reviews by Litpick Book Reviewer: Booklover1111
Recommend this book and review to your friends on Facebook